Philipp Weishaupt and the powerful bay gelding Coby made it the perfect finish to an exciting weekend of sport by winning the €300,000 Tops International Arena Grand Prix in blistering style. 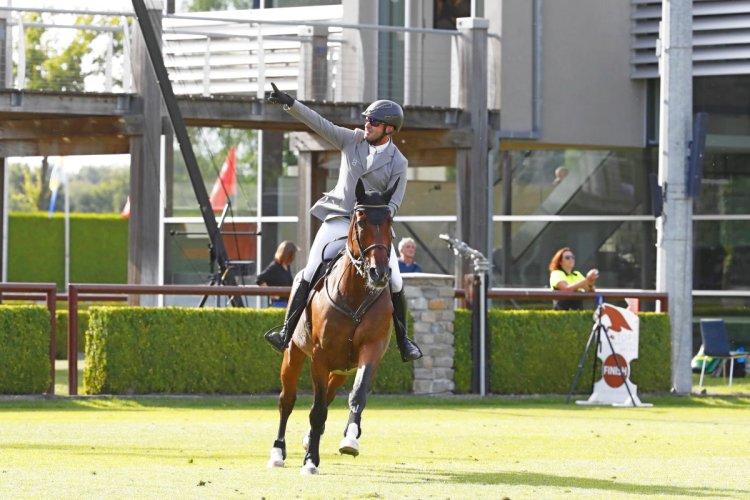 Lorenzo de Luca took second place on the super consistent mare Cash du Plessis and the third spot on the podium was clinched by America’s Lillie Keenan and Queensland E. It was an afternoon of world-class performances and the equine firepower on display was breathtaking with familiar star horses and future champions lighting up Tops International Arena and giving fans around the world watching GCTV an incredible treat.After his win, Philipp said: "A horse like Coby that it’s fast and a real proper Grand Prix horse makes life much easier and I also just caught the perfect rhythm during the whole class and the whole jump off so I’m extremely delighted today.  I saw Lorenzo jump,  he was quick so he put extra pressure on me and I have just thank god it worked out today. Coby is good in both indoor, outdoor, small sand arena, big grass arena, he’s won three 5* Grand Prix in the last 6 months which I don’t think there are too many horses that have done this so I’m so happy to have him he’s just such a great horse. I’ve been coming 20 years to Valkenswaard and never won the Grand Prix here so it’s great"The build-up to the jump-off was a fascinating look at the form of both top riders and horses and the immaculate grass arena was the perfect stage for the world-class CSI5* Grand Prix with the 1.60m course proving a robust test of the best. A quarter way into the class was when clear rounds started coming thick and fast as 10 combinations out of the 45 starters made it through to the jump-off.Nisse Lüneburg came cantering back into the huge grass arena for the jump-off and showed his big bay the final fence. The pair set out around the course with determination but it finished with 4 faults. Mike Kawai featured in his first ever CSI5* jump-off but the third fence a tall skinny brown upright fell knocking his chances of a podium finish today.Queensland E easily excelled on the footing. Lillie Keenan rode her new partner with ease to finish clear and take the lead for now. But she didn't stay in the lead for long as Lorenzo de Luca and Cash du Plessis cut over a second and half off their time and proved one to beat. However, it was three back-to-back double clears and fast ones as Philipp Weishaupt and Coby took extreme risks that paid off to stop the clock in 38.61s - a time that looked unbeatable to the impressed public. Last week's Tops International Arena CSI4* Grand Prix winner Omer Karaevli had a surprise run out to the penultimate fence after his roll back to try and beat Philipp was just too tight. Marcus Ehning looked up on the pace of his fellow German rider with Stargold clearing everything by a mile until he knocked the second to last putting him off the radar for the win today.None of the last three competitors in the jump-off Jos Verlooy, Beat Mändli or Patrik Majher could touch Philipp and Coby handing them the win and their third CSI5* Grand Prix win in the last six months, an achievement not many horses have done.