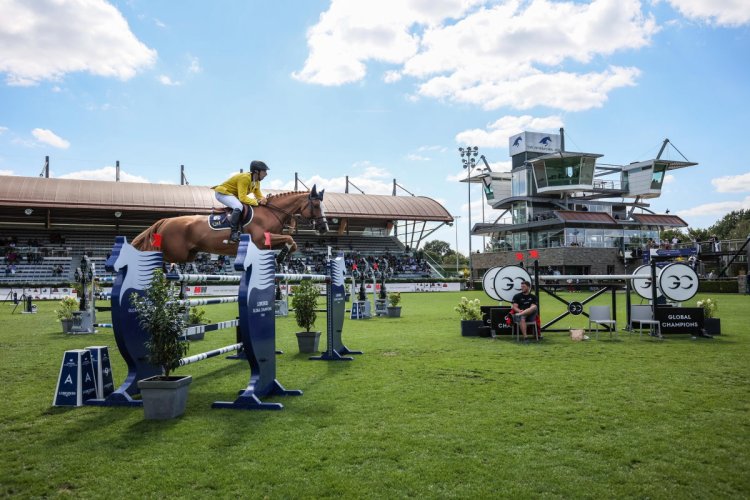 The on-form duo thrilled the crowd with an impressive jump-off against the clock, putting them in pole position and winning the final 5*, a 1.55m class at the world-class Tops International Arena in Valkenswaard.

Full of praise for his fantastic horse jumping on the spectacular facility and grass arena, Yuri commented: "This grass is for sure the best grass in the world, its unbelievable. If you imagine that we had six events here before, and the grass is still like this... It's amazing to have this opportunity to ride on this grass."

With crowded stands, local and international spectators alike were on the edge of their seats as an impressive lineup of jump-off horse and rider combinations took to the arena. Securing the win by just 0.25 seconds from Irish champion Bertram Allen and his impressive chestnut gelding, Mansur and Vitiki impressed all with their calm yet lightning-fast round.

The courses set by Italian course designer Uliano Vezzani asked all the right questions in all the right places, with eight horse and rider combinations qualifying for the second round and jump off, and five jumping a double clear round and finishing the class faultless.

With the sun shining on a spectacular Dutch Day, the home of the Longines Global Champions Tour, and host of the 12th leg of the series, Tops International Arena continued to again play a perfect host to some of the best horse and rider combinations in the world as the weekend rounded out in Valkenswaard.

Referencing his win, Yuri commented on Vitiki's form going into the class: "It is super to finalise the week like this, with Vitiki it's always a bigger pleasure for me because of his past every time we have a good result I enjoy it even more."

The podium was rounded out by Allen in second and leading Egyptian rider Nayel Nasser aboard his impressive bay gelding, Jiminy Cricket with a time of 36.95 seconds, just 0.33 seconds behind the leader in third.

Hans Dieter-Dreher and Maikel van der Vlueten aboard O'bailey VB Brouwershof were the last of the clear rounds, putting them into fourth and fifth place. In sixth the crowd were treated to recently crowned World Champion Henrik von Eckermann and Glamour Girl who incurred an unfortunate four faults early in the class.

Other leading riders that impressed with faultless first rounds were Samuel Hutton and Oak Grove's Laith of Great Britian and Marlon Modolo Zanotelli aboard Harwich VDL. With all the action from today and previous two days of elite level sport at the impressive Tops International Arena available to watch via GCTV, spectators from around the world can join us in watching the top riders battle it out.

The Longines Global Champions Tour race moves to Rome, Italy into the spectacular Circus Maximus for the thirteenth leg of the ever-exciting season in 2022 next week.