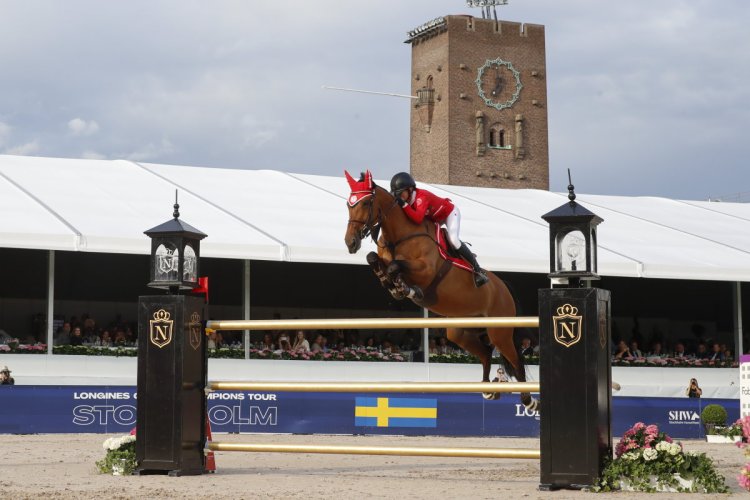 Riding top horses Catch Me Not S and H&M Indiana the dream team secured just one of two clean sheets of the day.

With Sweden being the only stop in Scandinavia on the global circuit, Stockholm Hearts have propelled themselves to the lead after today’s result with the riders keen for a second win of the season after Doha. Malin Bayard-Johnsson said: "Well there is quite a lot of pressure, especially this weekend. Of course, there is always pressure when you do this team class but it's a little bit extra today. Peder said let's not be the quickest because he doesn’t want to go last tomorrow but as it went we are in the lead so of course it's great and he can take the pressure for sure.”

Her teammate Peder Fredricson agreed; "It’s always nice to be in the lead. We are last to go tomorrow so the pressure is on but that’s what we like.”

In bizarre weather conditions, enthusiastic spectators were treated to the highest level of sport throughout the edge-of-your-seat class. After an early and fast double clear from Stockholm Hearts, the crowd had to wait until last to go Rome Gladiators team of U25 Zoe Conter on Dawa de Greenbay Z and Shane Breen with Z7 Ipswich for the next faultless rounds of the day from the same team. It was a nerve-racking finish as the Hearts finished just 0.07s faster to secure pole position for tomorrow’s showdown. Valkenswaard United and Shanghai Swans both kept all the poles up but finished with just a single-time fault breathing down the necks of the Hearts and Gladiators.

Fans flocked to the historic Swedish Olympic stadium, which hosted the first-ever World Equestrian Games in 1990. Stockholm marks half way through the 2022 season and the final event before the exciting mid-season team transfers. Throughout the championship race so far there have been thrills and drama in every leg, with the dynamic team competition bringing together never-before-seen combinations and breathtaking sporting action as every point counts in the race to the GC Prague Playoffs.

Course designer Uliano Vezzani took on the challenge of the half-sphere-shaped arena, with the curved circumference adding it’s own unique stamp on the global circuit. The course featured an option of strides for the riders to choose in the final line of three Liverpool's in a row. The GCL double sat in the shade and caught out a few combinations and riders had to keep a careful eye on their pace as they navigated the flowing, twisting course with a tight time allowed of 84s.

Today saw the return of Explosion W to the GCL circuit making a crucial first appearance for the Paris Panthers to try and lift them from the latter end of the rankings. But an early and a late fault from Darragh Kenny and Chic Chic immediately put the team on the back foot once again before the back rail of the Fastator oxer for Explosion W brought the team up to 12 faults.

Last year’s season champions Valkenswaard United started as they meant to go on with Marcus Ehning and Stargold posting a rapid clear round. But it was a gut-wrenching time fault for consistent U25 rider Gilles Thomas and Luna van het Dennehof to deny them of a clean sheet in Stockholm.

Making his GCL debut, Philipp Schulze Tophoff was picked first to go for current league leaders Berlin Eagles powered by Fundis. Proving his worth the U25 rider soared round on 12 year old grey Concordess Nrw to secure a clear and wear the leading armband with pride. It was a very unusual 4 faults from Philipp Weishaupt on Coby as the first part of the GCL double came tumbling down to be one of three teams who finished on a score of 4 along with Istanbul Sultans and New York Empire powered by Lugano Diamonds.

Keeping themselves at the sharp end of the grid Shanghai Swans’ are in prime position heading into Saturday’s showdown after a clear from Christian Ahlmann and Solid Gold Z before a single-time fault from Max Kühner with Elektric Blue P.

Stockholm is the stage for the home team to shine and they set hearts racings today. Setting the Stockholm Hearts up perfectly for tomorrow, the Olympic Stadium erupted as Peder Fredricson and Catch Me Not S came home on a clean sheet to add to Malin Baryard-Johnsson’s flawless round and produce the first double clear of the day.

Back competing for the first time in 5 weeks after a broken collar bone, London Knights’ Laura Klaphake couldn’t have done anything more as she set teammate Abdel Saïd up for a perfect round. It looked like the Knights were on track for a double clear until the last line caught Goldenstar and Saïd out bringing two poles down and the team totalling up to 8.

There was drama when last week's winners Prague Lions picked up 16 faults to sit in last place overnight after a hefty 11 faults from Pieter Devos when Kannabis van de Bucxtale got a little green in the arena.

Last to go Rome Gladiators fielded U25 rider Zoe Conter on Dawa de Greenbay Z to go first. The pair put in an epic performance delivering a fast clear and keeping Stockholm Hearts fans holding their breath. Speedy duo Shane Breen and Z7 Ipswich stepped up to the plate to secure a fast clear but slipped just behind the Hearts by 0.07s.

After Cannes, the top 4 teams in the current standings are separated by just 7 points so every rail will count this weekend will have an immediate impact in the rankings. Tune in tomorrow at 14.55 via GCTV to find out how GCL Stockholm Round 2 plays out.

Who Jumped It Best: The European Championships Edition

‘You are likely to kill someone’: Rider appeals to stop balloon releas...