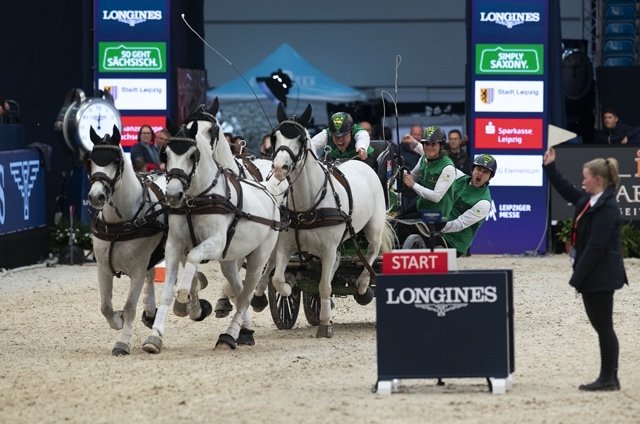 As the final competitor to start late on Friday night for the first round of the FEI Driving World Cup™ Final in Leipzig (GER), Bram Chardon (NED) laid down his claim to the 2022 title with a fantastic drive.

Smoothly steering his four-in-hand of grey horses through Jeroen Houterman’s (NED) flowing course of thirteen obstacles, he managed to leave the balls on top and recorded a blistering time of 135.80 secs. Reigning champion Boyd Exell (AUS), who is aiming for his 10th indoor title, was the sixth competitor to go and had set the fastest time of the night of 143.35 with no balls down.  Dries Degreick (BEL), in his first FEI World Cup™ Final, drove a quick course but with one ball down finished in third on a score of 152.76.

"It is incredible to start the finals here. I watched the others on the screen. I knew Boyd by far was the quickest time, so I thought, if I can get near his time I am going to be happy!"

A delighted Bram said, “It is incredible to start the finals here. I watched the others on the screen. I knew Boyd by far was the quickest time, so I thought, if I can get near his time I am going to be happy. Definitely I was planning on staying clear, I was trying to go a little bit more safe, but then when the horses felt so good, I just let them go and pushed them to the end, when I knew there was more in it, this is fantastic.”

Seven of the world’s leading horse four-in-hand Drivers are competing in the 20th Indoor Final which was last held in Bordeaux in February 2020. For the first time a female driver is competing, Mareike Harm (GER), who drove a smooth round but knocked three balls and finished in sixth place on 163.89. Fellow German, Michael Brauchle, the wild card entry, ended the night in fifth on 156.94.

Glenn Geerts (BEL), was fourth on 156.94 after driving a clear but slower round.  Making uncharacteristic mistakes was former champion Koos de Ronde (NED) who ended in seventh on 173.78 after knocking several balls and incurring extra penalties for having to stop so the course could be rebuilt.

All the Drivers are now eligible to return for the second round of the Final on Sunday. They will drive in reverse order and the top three will drive again to decide the final placings.  All except Bram, who will start with a penalty score which is 50% of the differential between theirs and the leader’s score.