In a thrilling afternoon of elite-level show jumping, Michael Pender of Ireland has secured the top podium position in the Longines Global Champions Tour Grand Prix of Valkenswaard aboard HHS Calais. 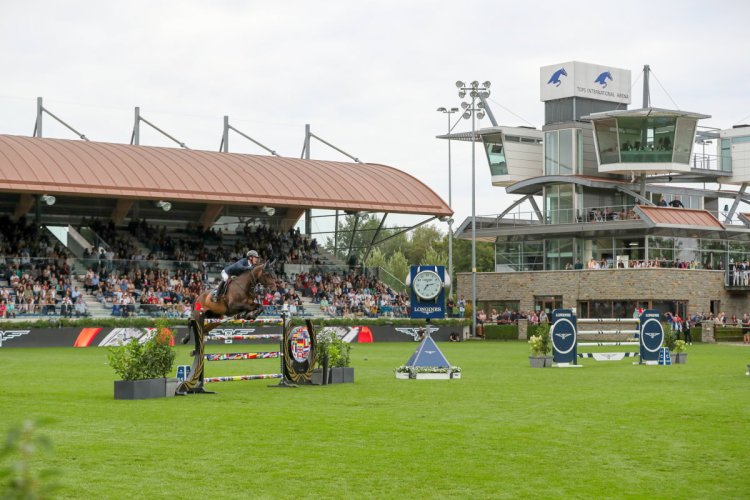 The 22-year-old pulled off an extraordinary win against phenomenal odds and claimed it as ‘A dream come true.’

The local crowd were on their feet cheering during his lap of honour at Tops International Arena as he sealed a place in the GC Playoffs in Prague which left the Irishman speechless. It was to be one of the most entertaining jump-offs of the turbo-charged season with 9 top combinations into the jump-off at a pivotal stage in the championship series, the atmosphere was tense and the challenge was immense.
The third youngest LGCT Grand Prix winner Michael Pender explained: "It’s my first 5* Grand Prix win so I am absolutely over the moon. My horse has been so close, so many times, so he definitely deserves it - he loves these big grass arenas and the footing here at Tops International Arena is incredible".

German favourite Philipp Weishaupt had to settle for second place, aboard his spectacular Coby, while the podium and the only other double clear of the class was rounded off by Bliss Heers of the United States of America and her Diamant de Semilly stallion, Antidote de Mars.

It was clear early on that the course was a major challenge with tricky, delicate verticals and substantial oxers in a double combination all requiring supreme power and precision. With the pristine grass arena bathed in early evening sunshine, the stakes were high for the 12th leg of the circuit.

Christian Ahlmann managed to extend his lead in the LGCT season championship with 236 points while Pieter Devos jumps up to second on 198 points. Ben Maher had dropped to third on 195 points and two-time LGCT champion Edwina Tops-Alexander slides into fourth with 183.5 points.

Super aerial views of the Tops International Arena facility played out on the giant screens and on TV as the action got underway in the Longines Global Champions Tour Grand Prix of Valkenswaard. The enthusiastic crowd at the Tops International Arena were kept on the edge of their seats with an impressive showcase of world-class show jumping, with leading riders such as Edwina Tops-Alexander of Australia, Hans-Dieter Dreher of Germany and Jur Vrieling of the Netherlands all qualifying for the second round and jump off.

A gutted Phillipp explained: “I have probably the fastest horse, but I wasn’t the fastest rider today. I am super happy for Michael Pender, he deserved it – unbelievable rider, he was fighting like a lion today with a slip and still clearing the second last jump”

Course designer Uliano Vezzani built a big, bold course at the Tops International Arena for the twelfth LGCT Grand Prix this season, posing questions to horse and rider combinations resulting in nine qualified combinations for the second round and jump-off.

The second round proved challenging with just three clear rounds – Marlon Zanotelli aboard his VDL Edgar M were one of the last riders to take to the jump-off leaving a late shake-up to standings on the cards. An unfortunate slip by his mount VDL Edgar M resulted in a rail at the second to last. A gallop to the last kept them in the running with a time of 42.23 seconds resulting in the duo being the fastest of the four-fault combinations and locking in fourth place.

In what would have given him a podium finish, Jur Vrieling and Fiumicino van de Kalevallei set out on a mission, putting a blistering time of 44.22 seconds on the clock. An unlucky rail at one of the jump-off’s biggest questions, the Longines double combination across the centre of the arena set him back into fifth place.

With the 12th starter for the Super Grand Prix in Prague, the Czech capital, now confirmed in Michael Pender, all eyes will look forward to the remaining three opportunities to qualify for the much-anticipated face-off.

The Longines Global Champions Tour race moves to Rome, Italy into the spectacular Circus Maximus for the thirteenth leg of the ever-exciting season in 2022 next week.