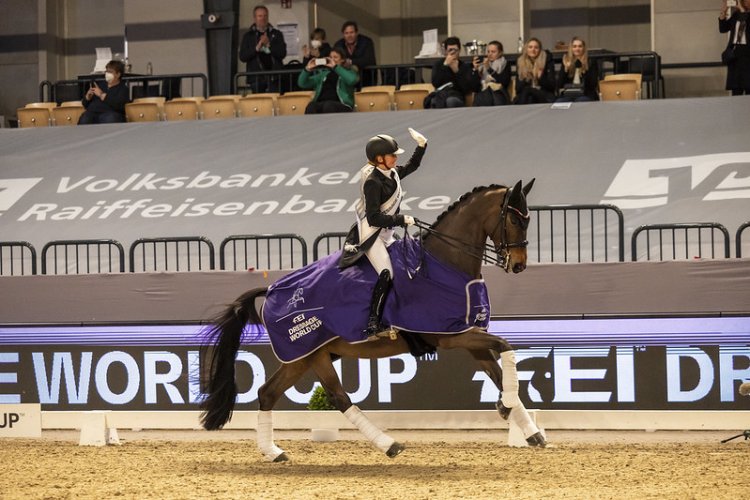 The Tokyo 2020 Olympic double-gold medallists were last to compete in the field of 13 starters and were under considerable pressure after a superb performance from Denmark’s Cathrine Dufour and her relatively inexperienced 10-year-old gelding Vamos Amigos who put a big score of 86.725 on the board to take the lead when third-last into the ring.

However the German duo racked up 90.615 despite a couple of mistakes along the way to clinch top-spot emphatically, so Dufour lined up in second ahead of compatriots Nanna Skodborg Merrald and Atterupgaards Orthilia (84.480) in third and Carina Cassoe Kruth and Helline’s Danciero (83.670) in fourth place.

Five-time series champion, German legend Isabell Werth who will be chasing her fourth title in a row at the forthcoming Final in Leipzig, Germany in April, finished fifth with the 12-year-old stallion DSP Quantaz on a score of 82.640.

Today’s win sees von Bredow-Werndl move into joint-sixth place on the Western European League leaderboard which continues to be headed by her brother, Benjamin Werndl, while Denmark’s Dufour and Skodborg Merrald are lying second and third ahead of the sixth and last qualifier which will take place at ’s-Hertogenbosch, The Netherlands in three weeks’ time.