The search for a perfect new horse for Dr. Diehl’s daughter comes to a conclusion. My family piled into the truck, trailer in tow, and we began the four-hour drive to meet the American Saddlebred named Kidd that I hoped would become my youngest daughter Morgan’s new Pony Club mount. After abruptly having to retire […] The post Vet Adventures: Meeting Kidd appeared first on Horse Illustrated. 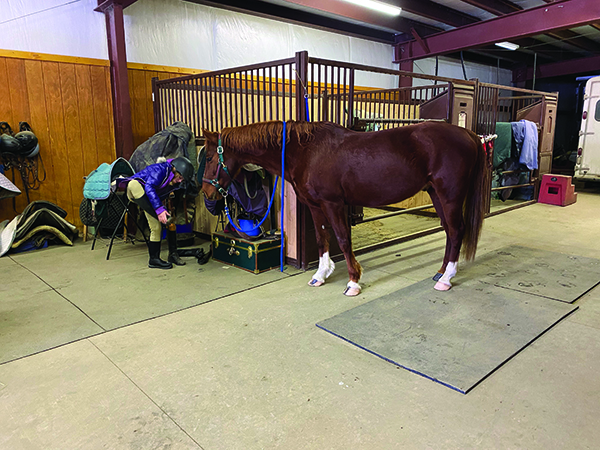 The search for a perfect new horse for Dr. Diehl’s daughter comes to a conclusion.

My family piled into the truck, trailer in tow, and we began the four-hour drive to meet the American Saddlebred named Kidd that I hoped would become my youngest daughter Morgan’s new Pony Club mount. After abruptly having to retire her beloved Atlas, it had been a long summer of either watching sadly from the sidelines as the rest of her club rode without her or borrowing a horse that she didn’t know well.

I was planning to do my own prepurchase exam , provided Kidd and Morgan got along and that he was safe and sane. All we had to go on were a few videos and a long phone call with the present owner, a lovely woman named Peggy. I’d done my homework on Saddlebreds. I learned that they often made very successful jumpers and eventers but were often overlooked.

All About Kidd the Saddlebred

I felt very optimistic as we crossed the border from Colorado into Wyoming. The fact that I was even considering buying a Saddlebred was surreal enough, but it was even stranger that this was taking place in Wyoming.

I pictured Kidd rounding up cattle in a fancy Saddlebred prance. Or team roping with his tail high in the air. All of us had a good laugh in the car inserting Saddlebreds into all kinds of imaginary and unlikely western scenarios.

Indeed, Kidd’s owner-before-last had inexplicably bought him as a potential barrel horse, leaving poor Kidd a sweating, shaking mess when he flunked Barrels 101. When Peggy acquired him from Craigslist, she’d been shocked to see a Saddlebred for sale in Wyoming. Her goal was to give him a steady home until his forever family could be found, as she felt that she was too big to ride him. A friend of hers was riding him regularly, and he was doing very well.

We arrived in good time. Peggy gave us a quick tour of her place, a small farm with a big barn and several outbuildings. As we approached two outdoor runs, a chestnut head with a narrow blaze popped up and watched our progress with interest. I knew immediately that we’d found Kidd.

He was only 15 hands, small for a Saddlebred, and his ears were pricked as far forward as possible. Morgan was the first to reach him, and he delicately sniffed her outstretched hands and allowed her to stroke his muzzle. They socialized for a while, then we moved into the barn to watch him do some arena work before Morgan got on him.

A Ride to Remember

Kidd moved forward with the confident balance that I’d seen in his video. I admired his movements as Peggy put him through his paces. Even my husband, Jim, a dyed-in-the-wool Texan with a love for all things Quarter Horse, was impressed.

When Peggy finally brought Kidd in to be saddled up, Morgan was dancing with impatience. When she finally climbed onto the curious little gelding and rode around the small indoor arena, I knew by the look on her face that she’d already made up her mind. Kidd was hers.

Peggy suggested we move to the big outdoor arena. My other daughter, Sunny, was riding another of Peggy’s Saddlebreds, a shining black gelding who’d been a fancy show horse. Sunny and I were both enchanted, and the 12-year-old girl in me was already envisioning myself owning him. I was so taken with him that I almost forgot to watch Morgan and Kidd. When I refocused on them, she was trying to get him into a canter.

Now I’m no Saddlebred expert, but I know gaited horses, and if they find an excuse to break into a really, really fast trot, they’ll do so effortlessly. This leaves the hapless rider jouncing in a frantic machine-gun rhythm. Poor Morgan was bouncing so fast that she was a blur in the saddle. After traveling around the arena once in the staccato gait, she finally gave up on the canter.

Jim, Peggy and I were laughing so hard we couldn’t breathe, and my daughter glowered at us as she rode by.

“Well, she’ll need to work on that canter,” said Peggy, wiping tears from her eyes. “Kidd will do exactly what you tell him to, which is sometimes not what you intended. He needs to be ridden very intentionally.”

I radiographed Kidd thoroughly, finding nothing of significance. I peered into his eyes with my ophthalmoscope and listened to his heart and lungs. Then I flexed his legs, squeezed his feet with hoof testers, checked his teeth, and palpated his back.

Morgan and Sunny stood at his head, and there was a great deal of giggling as Kidd investigated them as thoroughly as I was investigating him, his ears always in the forward position. I’d never met such a curious horse.

Soon the deal was done and my husband went to load Kidd, which took a while. Given how many times the poor horse had changed hands, I didn’t really blame him.

Finally he loaded, sweating and shaking so hard the trailer vibrated. The girls hurried to reassure him from the side door. He calmed visibly, lowering his head to be stroked and resting his nose on Morgan’s shoulder.

We discussed his name on the way home, deciding that Kidd didn’t suit him at all. Everyone was tired and slap-happy and throwing out silly name suggestions. When I suggested we call him Kevin, after the bird from the movie “Up,” we all laughed hysterically because he really did look and act like that bird. When everyone quieted down, Morgan’s little voice piped up from the back seat.

And thus we came to be the proud owners of a curious little chestnut American Saddlebred gelding named Kevin. As I drove my now sleeping family and Kevin back to Colorado, I wondered what on earth I’d just gotten myself into.

To read Part 1 of this story, check out the March 2021 issue or visit www.horseillustrated.com/vet-adventures-perfect-horse .

This article about the meeting between an American saddlebred and his young new owner appeared in the April 2021 issue of Horse Illustrated magazine. Click here to subscribe!