The U.S. Dressage Team finished team competition at the Olympic Games Tokyo 2020 and captured the silver medal under the lights at Equestrian Park in Tokyo, Japan, making it the first time the team has collected a team silver since the London Olympic Games in 1948. The team competition saw eight nations vie for the […] The post U.S. Dressage Team Earns Silver Medal in FEI Grand Prix Special for Team Medals at Olympic Games Tokyo 2020 appeared first on Horse Illustrated Magazine. 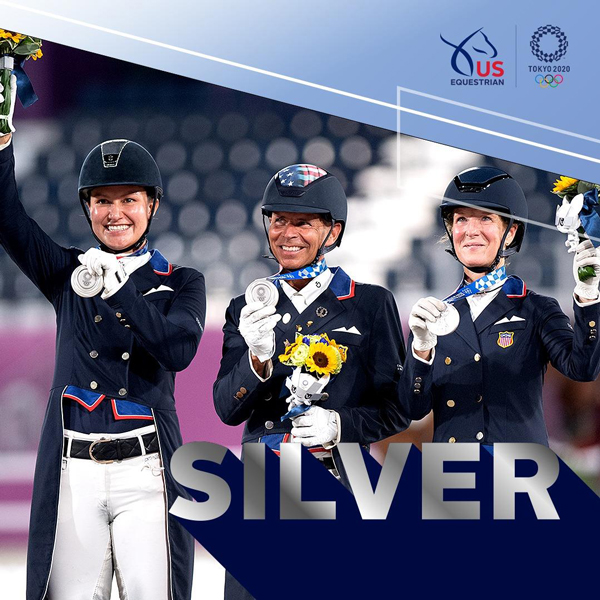 The U.S. Dressage Team finished team competition at the Olympic Games Tokyo 2020 and captured the silver medal under the lights at Equestrian Park in Tokyo, Japan, making it the first time the team has collected a team silver since the London Olympic Games in 1948. The team competition saw eight nations vie for the three coveted podium positions, with Germany taking gold, the U.S. earning the silver, and Great Britain awarded the bronze medal.

Adrienne Lyle and Salvino received a 76.109 percent from the panel, while Steffen Peters and Suppenkasper, who rode in the second group, finished the competition with a 77.766, a personal best for the combination. Sabine Schut-Kery and Sanceo anchored the team and received a career-high 81.596 percent from the judges as one of the final rides of the evening.

Lyle, of Wellington, Fla., and Salvino, a 14-year-old Hanoverian stallion owned by Betsy Juliano LLC, were the trailblazers for the U.S. Dressage Team, riding early in the first group order. The pair executed a mistake-free test, giving momentum to the team for their second ride with Peters and Suppenkasper.

“I’m super thrilled,” said Lyle. “I was really hoping we could pull off a score like that for the team today. We were a little conservative in the Grand Prix, and it wasn’t our greatest display, so I wanted to come out here and push for a little bit more. Despite the heat and humidity, he was really a good boy and he delivered with no mistakes, and that’s what you want for the team test.”

In the second grouping of combinations, Peters, of San Diego, Calif., and Suppenkasper, a 13-year-old KWPN gelding owned by Akiko Yamazaki and Four Winds Farm, rode one of their best tests to date and earned a superb score, improving from their test on Sunday in the team qualifier competition.

“This is exactly what I wanted for my team,” said Peters. “It’s one thing to ride individually, but when you pull a good score for your team it’s an incredible feeling. When we came out of the arena, I gave Mopsie a big hug and thanked him from the bottom of my heart. We were seriously in the zone. When we were out there about to go in the ring, I said, ‘Mopsie, please just do what we just did out here in warm-up,’ and we had a good schooling this morning. He did that for me when it counted, and it’s an incredible feeling when a horse will fight for you like that in the arena.”

As the anchor combination for the team, Schut-Kery, of Napa, Calif., and Sanceo, a 15-year-old Hanoverian stallion owned by Alice Womble, rounded out the team’s effort with another stellar performance and personal best. The duo, who made their presence known in their first outing on Saturday, returned with another strong performance for the U.S. Dressage Team, helping them to clinch their second-place finish.

“For me, this was my first time here at the Olympics, and it was quite intense to wait that long for the end of the class, but I am so proud of my horse, my team, my owners, and the coaches,” said Schut-Kery. “It’s been a really, really great experience, and I am still a bit speechless. I was filled with joy and pride. It’s such a team effort. It’s a big relief to deliver for the whole team, not just my teammates, but everyone involved, and it just meant everything. It was just pure happiness.”

The Exploration of Responsiveness

Inside the July issue of Your Horse: rider first aid & fly control spe...