The Berlin Eagles powered by Fundis duo of Christian Kukuk and Philipp Weishaupt soared to the top of the leaderboard today in Round 1 of GCL Madrid with a knife-edge result promising thrilling action in tomorrow’s Super Saturday Spanish showdown. 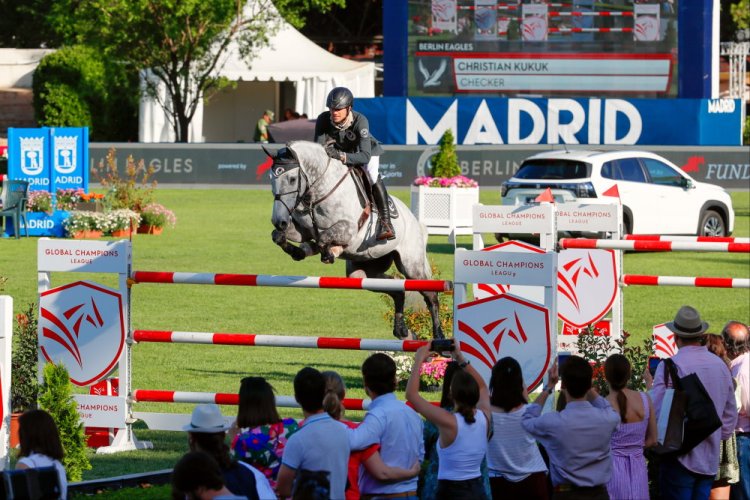 One of only two teams to jump double clear, the Eagles pulled out all the stops in the first European stop of the Championship, finishing in a faster time than Rome Gladiators Fernando Martinez Sommer and Pieter Clemens. Long-time member of the Berlin Eagles, Christian Kukuk explained: "To be honest when I walked the course I thought it was tough enough for the first day so I expected a few faults and then after the first two it looked quite simple and I was a bit surprised. But then actually following that we could see the course was quite tough today and I think in the end we can be very, very happy with our performance - we have two clear rounds. Only two teams with double clear rounds today so that definitely was a good start to the weekend."Teammate Philipp Weishaupt laughed: "I haven’t looked at my phone yet to see what Ludger says but never change a winning team. So I think both horses jumped well they are not too tired they both felt fresh and jumped really well so I think we just keep it like this tomorrow."With every point counting season-long tactics become ever more crucial as the Championship unfolds. Three teams head into tomorrow on four faults, with a further five on a combined score of eight faults, meaning the action will go right down to the wire in Saturday’s GCL Madrid final.Set in the picturesque Club de Campo Madrid, Santiago Varela Ullastres’ course was delicate to say the least; the poles rolling at the lightest of brushes, and a clever challenge for the very best riders in the world.First, to go, Rome Gladiators started as they meant to go on pulling out all the stops for a flawless double clear from Fernando Martinez Sommer with Cor Bakker and Pieter Clemens onboard Crescendo MB Z making it look very jumpable. But the poles kept coming and current ranking leaders Hamburg Giants picked up a costly fault when Bart Bles and Comme-Laude W had the delicate plank down ahead of Simon Delestre and Tinka’s Hero having an early rail to bring it up to 8 faults.Season favourites but currently sitting in 5th place in the Championship race, Stockholm Hearts powered by H&M We Love Horses looked on track for a beautiful from Malin Baryard-Johnsson and H&M Indiana but the last line caught them out having the combination and the last fence down. Lillie Keenan put in a star performance in her debut for the red team with a stellar clear onboard Argan de Beliard. In his very first GCL team competition, America's young gun Brian Moggre and MTM Vivre le Reve delivered a foot perfect clear round as he punched the air through the finish line. While teammate Sergio Alvarez Moya clearly had team orders to set a rapid time he took the first fence on the sharpest angle. Alamo didn’t pick his feet up enough and 4 faults were on the board immediately. But once again it was the U25 riders who led their teams with breathtaking displays of horsemanship. Mike Kawai (London Knights) delivered yet another clear round for his team this season along with Isabella Russekoff and Jumpy van de Hermitags for the Cannes Stars.Super consistent Berlin Eagles powered by Fundis played the game to a tee with their dynamic duo leaving all the fences up and in a faster time than Rome Gladiators to fly to the top of the leaderboard overnight. Christian Kukuk with Checker and Philipp Weishaupt on Coby will be the last team to start in tomorrow’s dramatic showdown. Valkenswaard United & Scandinavian Vikings both looked set for solid double clear rounds after Marcus Ehning and Geir Gulliksen made it look easy, but in a dramatic turn of events they ended up at the bottom of the leaderboard when both their teammates racked up heavy faults. So it would be the Berlin Eagles who stole the show in today’s GCL opener, paving the way for a thrilling face-off in the Spanish capital. All the action will be streamed live, tune in via GCTV from 15:00 local time to watch the drama unfold.