The second day of exciting action at Tops International Arena in Valkenswaard showcased the exceptional horse and rider talent across all sections in various classes on the grass and sand arenas. 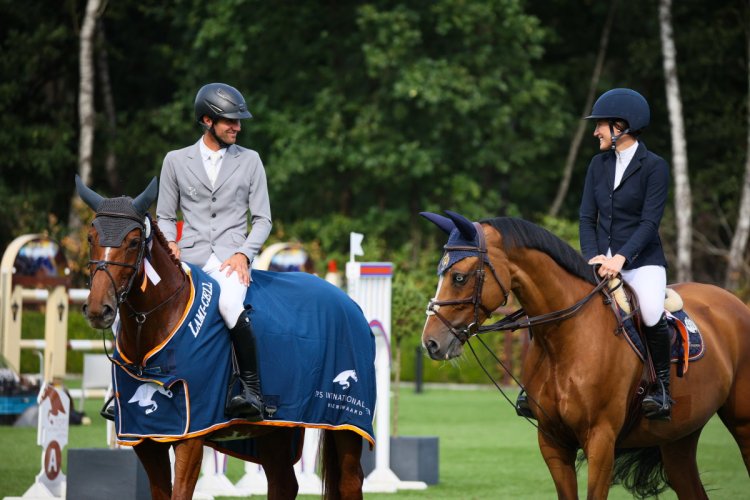 It was Christian Kukuk who reigned supreme in the 1.50m CSI4* speed class with his fast and furious mare Nice van't Zorgvliet. Knocking Jessica Springsteen off top spot after her exception round on Hungry Heart but the pair were two seconds off the winning time in the end. Laura Kraut made it an American silver and bronze as she secured third place on Calgary Tame who is known for his vast stride and super fast turns.

Crowds cheered as Kukuk set himself up perfectly for tomorrow’s Grand Prix in a fantastic display of sport. Tickets are still available to join tomorrow’s action on the buzzing Place de Concord at the link below.

23-year-old Sanne Thijssen, who will travel to the World Championships in Herning, Denmark, in August, with the Dutch jumping team, won the Young Horse class on this sunny Saturday of Summer Event 3. Yesterday it did not quite go according to plan but today they were unbeatable. Sanne went clear in 61.93 seconds with the six-year-old KWPN mare La Pleasure (For Pleasure x Alicante HBC). La Pleasure was therefor also the best six-year-old in this competition. Sanne said: "Winning two classes today was great. La Pleasure is one of my top young horses and im so excited for the future of this horse. She absolutely loves the grass arena here at Tops where the footing is so perfect. It's perfect to help the young horses grow. Then in the two-star my grey Zeppelin Blue showed his talent fantastically. I could really let him go and move across the ground which I think helps us secure the second win of the day."

Emanuele Gaudiano lived up to his reputation in the CSI2* Big Tour (direct on time, 1.45m) and set the fastest time with the eight-year-old Mecklenburg stallion Vasco (Vivant x Chacco-Blue). The speed specialist crossed the finish line in 62.36 seconds. He explained: "Vasco was a fantastic and jumping brilliant and it feels super to win this class today. The facilities here are brilliant for all the horses. They learn lots here and I’m looking forward to the Grand Prix tomorrow."

Frenchman Julien Anquetin was in the lead for a long time but had to settle for third place. He realised a time of 62.84 seconds with the SF mare Baya du Ter (Kannan x Poor Boy). Several combinations tried to improve the time of Anquetin and Gaudiano, including Jessica Springsteen with Naomi van het Keizershof (BWP, Cardento x For Pleasure), Niels Kersten with Grieg S (KWPN, Indoctro x Kenwood) and his brother Lars Kersten with Hallilea (KWPN, VDL Zirocco Blue x Larome). The latter did best and came second in a time of 62.79.

After her first place in the Young Horses class, Sanne Thijssen also took the win in the CSI2* Medium Tour. With a super round she went 0.06 faster over the fences than the Italian Giampiero Garofalo who was in the lead until then. Sanne rode the Holsteiner gelding Zeppelin Blue (Zirocco Blue x Ramiro) in 66.70 over the finish line. Garofalo stopped the clock at 66.76 seconds with First of April CL (KWPN, Arezzo VDL x Oklund) in his clear round. Brazilian Yuri Mansur Guerios completed the top three with Hellix du Seigneur (SBS, Curby du Seigneur x Calvaro).

Yesterday Romain Potin won the  CSI1* 1.30/1.35m class and today he repeated this result in the 1.25m, a competition in which the jump-off was ridden directly after a clear first round. The 34-year-old from northern France was riding the SF mare Brooklynn (Contendro x Echo des Forets II) in this competition. As the 11th starter he set a super fast time of 29.74 seconds that no other combination after him could match. The father of two daughters won the Grand Prix of Hardelot with the same horse this year. British rider Claudia Moore came second with H Quainton Xtra Factor (KWPN, Namelus R x Nissan Catango Z). Third place was for Belgian Guido Hornesch and his mare Karanka (Cidane x Ikoon).

The victory in the CSI1* 1.35m section went to the Italian rider Giampiero Garofalo. He was the fastest this time with the SF gelding Fandango de Semilly (Diamant de Semilly x Apache d'Adriers). The 28-year-old, who won team bronze at the 2018 Mediterranean Games in Barcelona is starting for the first time at Tops International Arena. He also represented Italy at European Championships for Young Riders (2013 and 2015) and Juniors (2011 and 2012). This year he managed to win the Grand Prix of Kronenberg in May. Second place was for Shady Ghrayeb from Syria with Fara de Beaufour (SF, Diamant de Semilly). Jillian Terceira, riding for Bermuda, came third with Chanita (Holst, Caretino x Contender).

The Syrian Layth Ghrayeb was more than 4 seconds faster today in the 1.15m competition than the second-placed Coline De Coninck. He thus repeated his victory of yesterday. Ghrayeb stayed clear and stopped the clock at 57.78 seconds with Elite de Ponts (SF, Malito de Reve x Si Tu Viens). The only 15-year-old is in a winning mood. The last few months he has won in Kronenberg, Opglabbeek, Sharjah and Abu Dhabi. Belgian Coline was third on Friday and today second with the BWP gelding Johnny B Goode VH Harteveld (Mr. Blue x Nabab de Reve). Giel Vangeebergen came third for Belgium with Gazelle (KWPN, A' Lee Spring Power x No Limit).