The future was on display in Ermelo (NED), with potential Olympic and World champions seeking their first major world title at the LONGINES FEI WBFSH World Breeding Dressage Championships 2022.

Ridden by Victoria E. Vallentin (DEN), Lyngbjergs St. Paris secured a 9.12 score to take the title just ahead of the Vitalis’ son Vitalos ridden by Leonie Richter (GER) with a score of 9.06, and they were closely followed by the winner from Thursday’s qualification, Fashion Prinz OLD ridden by Frederic Wandres (GER) with 9.0 points.

Vallentin explained after her ride: “Paris is very special to us as we have had her since she was just three years old. It makes it extra special to win on a horse you own and have educated yourself.

“She delivered her very best both days and I could really feel she tried to do everything right for me”.

In front of an enthusiastic crowd, the elegant black stallion Global Player OLD impressed the judges too, and convincingly claimed the title of world champion at the LONGINES FEI WBFSH World Breeding Dressage Championships for 6-Year-Old Horses.

Beautifully presented by Eva Möller (GER), Global Player OLD danced his way to first place with 9.76 points at the CH-M-D YH Final for 6-year-old-horses scoring 10 in both submission and perspective. The silver medal was won by another elegant and light-footed stallion, last year’s world champion, Hesselhøj Downtown and Jeanna Hogberg (SWE) with 9.38. Lennox U.S. and Jill Bogers (NED) slotted into third place for the bronze medal with 8.9.

At the press conference Möller reflected on what it takes to become a Young Horse World Champion and why Global Player succeeded.

“I have had Global Player now since he was three, and he never did anything wrong in his career.

“It takes a lot to become a world champion, it is not just about the quality of the horse, it is the health and trainability (..) and that is really Global Players’ strength that he is so strong that he can deal with everything. He is breeding, but he does not get crazy because of that, but focuses on the sport. He is very reliable”.

Charlotte Fry (GBR) has won another world championship gold medal on an impressive and big moving black stallion as she rode the 7-year-old Kjento to take the title at the LONGINES FEI WBFSH World Breeding Dressage Championships for 7-Year-Old horses.

The smiles must be extra wide at Van Olst Horses these days after an extraordinarily successful year, as their horses claim one world championship title after another with Charlotte Fry in the saddle. Today, the powerful Kjento reclaimed last year’s title as World Champion, this year for 7-Year-Old Horses, with 85,786% and a 10 for the trot, putting him comfortably in front of Destello OLD ridden by Beatrice Hoffrogge (GER) on 83.957 %. In bronze medal position, we find another powerful stallion, Escamillo, nicely ridden by Manuel Dominguez Bernal (ESP) on 83.072%.

Fry expressed her fondness for Kjento at the press conference after her wining ride on Sunday:

“He just has the most amazing character. He is super chilled but as soon as you pick up the reins, he is hot, and he is ready to go! He is really sharp, and he is just the perfect horse!

“Kjento gave me an amazing feeling when I entered the arena today. There was definitely pressure today but I think after we had a nice and clear round in the qualifier, we went for much more power today, and he just really delivered”. 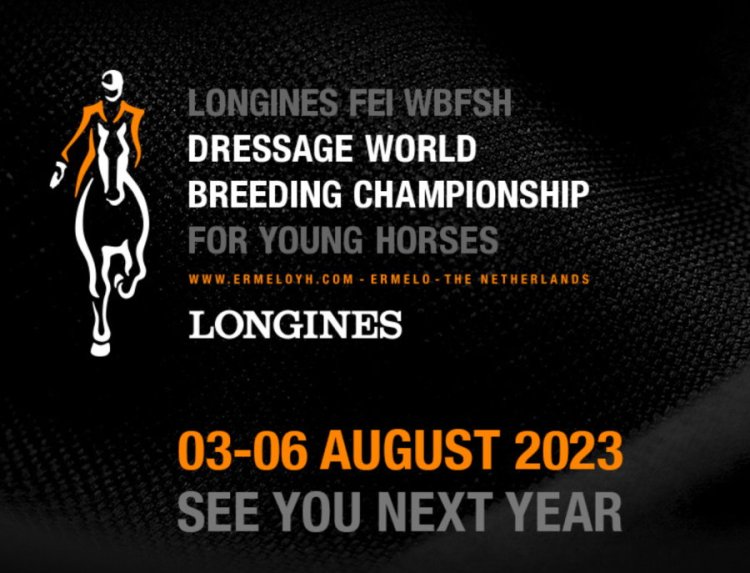