Belgium’s Gilles Thomas had his first five-star win today when claiming the historic Longines King George V Gold Cup at Hickstead. It was the first time a Belgian rider has lifted the iconic trophy since Jacques Misonne’s win in 1931. 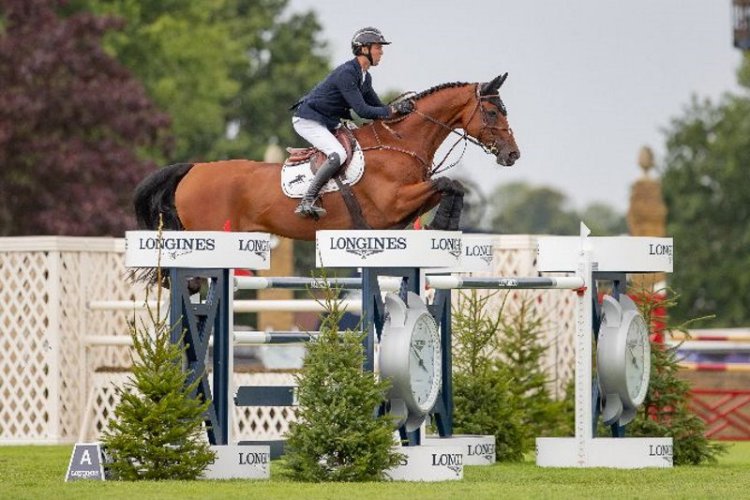 Eight riders made it through to the jump-off for today’s Grand Prix, with Kelvin Bywater’s cleverly-designed track catching out many of the sport’s leading names. In the second round, Britain’s Robert Whitaker initially led with a fast-four fault round on Evert, before Ireland’s Trevor Breen delivered the first double clear on Gonzalo to move into the top spot. Things then got exciting when Brazil’s Marlon Modolo Zanotelli (Harwich VDL) went nearly 1.5sec quicker to go ahead of Trevor.

Next up was Great Britain’s star Harry Charles, who was hoping for his first victory in the class that his father Peter won in 2009. Riding the experienced 16-year-old Borsato, Harry delivered a brilliant clear round in a time of 51.22sec. But British hopes for a home win were dashed when the Gilles, the last rider to go, shaved an impressive 3sec off the time to take the €49,500 first prize.

“This is only the second time I rode a jump-off with him – but I didn’t know he was so quick, so I just went for it! I thought it was quite slow but I think I have a quick horse here! I had the advantage that I was the last to go,” said Gilles, 24. “Hickstead is a historical Grand Prix, it’s really special. Kevin Jochems is my best friend, his first Grand Prix win was also here in 2018, so I will call him later and tell him this Grand Prix is not so hard to win!” he joked.

Harry Charles, who heads to Herning next week for the ECCO FEI World Championships, was pragmatic after just missing out on the title. “I came here with the goal to try to win this Grand Prix with the horse – he’s 16 so he has all the experience now, and he’s just getting better with age. He jumped the first round fantastic, and it was a cool course to jump, actually – we jump in a lot of small sand rings with delicate little poles, and it was nice to have some proper jumps,” he commented.

While Britain didn’t get their longed-for win in the Grand Prix, the host nation did enjoy a victory earlier this morning with Sally Goding winning the 1* Royal International 7 & 8 Year Old championship on Spring Willow.

“She’s very feisty, and she absolutely loves it – the bell goes and she’s off, but she does like to do it her own way. She doesn’t always want to listen to what I say, but she’s usually right anyway! She’s so careful and she’s always on it – she thinks quicker than I do,” said Sally.

Six horses came forward for the jump-off, in which Sally delivered one of only three clear rounds. “I had a good draw – I was last to go, so I was able to watch a few go round, which helps with the distances. Then, I saw that there weren’t many clears in the jump-off, so I didn’t want to go too fast, because I wanted to leave them up,” she added.

Starting Out and Remaining Incomplete

5 gilets tried and tested by horse owners and riders