The iconic duo of Peder Fredricson and Malin Baryard-Johnsson defeated the rest of the field, not making a single mistake all weekend in a dramatic battle to crown Stockholm Hearts powered by H&M We Love Horses winners of their home leg. 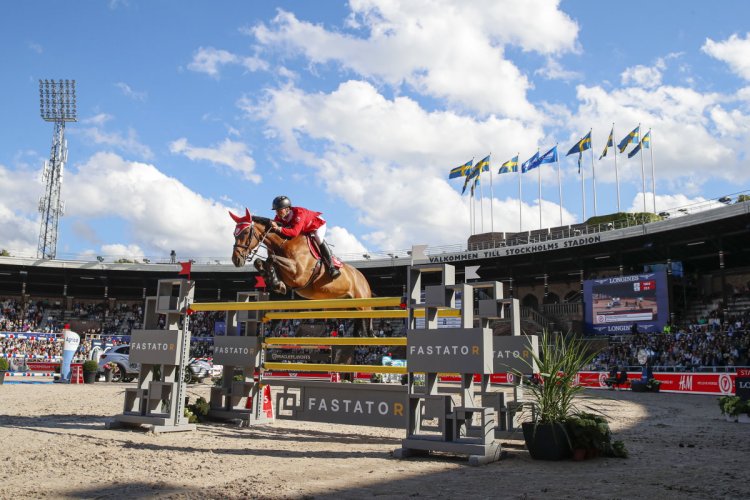 n a sell-out Saturday, spectators were packed to the rafters of Sweden’s historic Olympic Stadium creating an electric atmosphere as today’s drama unfolded in GCL Stockholm presented by Fastator and the Swedes took their second win of the season.

Heartbreakingly, the Shanghai Swans were denied the win after a costly time fault in round 1 from Max Kühner. Despite Christian Ahlmann and Kühner both going clear today they handed the Hearts the win finishing with 1 on the scoreboard.

When asked what is it like to ride in the electric atmosphere, Peder pointed to the cheering crowd and said: "What do you think? Just listen to that, it is unbelievable."

A delighted Malin said: "It is so nice to do the home win in front of this crowd, when you are on a horse like my fantastic Indiana she makes my life so much easier. But of course, the pressure makes it harder but she is in super form and we are doing amazing at the moment."

Peder then spoke about leading the championship explaining: "We are very pleased about it and we are going to do our very best to keep the [ranking leaders] armband on this arm."

The Stockholm Hearts put in a flawless performance, taking over as ranking leaders on 158 points and kick start their charge on the overall championship standings. Berlin Eagles powered by Fundis drop to second place with 145 points after a surprising 10th place finish today while Prague Lions cling on to third with 137 points. But after their third podium of the season, Shanghai Swans have jumped up to fourth on 135 points.

Spectators were packed into the stadium, and the arena echoed with rapturous applause and cheers with a knowledgable and appreciative crowd. As the sun started it’s slow descent across the arena, the atmosphere could be cut with a knife as the world’s best horses and riders fought with every ounce of their being for their teams.

Today’s GCL Stockholm produced another shock set of results as the tight-knit field rode under enormous pressure in the Olympic Stadium. Last week's winners Prague Lions faced elimination and the minimum points possible after Pieter Devos fell off at the spooky final fence. Both Devos and Mom's Coleraine des Bergeries got up straight away and walked out of the arena to a round of applause.

GCL ranking leaders Berlin Eagles powered by Fundis kept their same overnight combination of U25 rider Philipp Schulze Topphoff on Concordess Nrw and Philipp Weishaupt with Coby for the second round of action in Stockholm.

The first double clear of today came from Paris Panthers pairing Harrie Smolders on the uber-consistent Monaco and the famous Explosion W and Ben Maher. The team stayed on their overnight score of 12 faults picking up 7th place overall surprisingly one of their best placings this year.

New York Empire powered by Lugano Diamonds made just a single horse change bringing out the big guns and swapping Scott Brash onto Hello Jefferson. Entering the arena on 4 faults, Spencer Smith knew only a clear would keep them in contention but it was a costly rail mid-course from Quibelle that brought the team total up to 8. Brash and Jefferson then showed the enthusiastic fans a masterclass clear putting Empire into the lead for the time being.

In a strong position and aiming for back-to-back wins in Stockholm, Valkenswaard United meant business. Marcus Ehning let out a cheer as he crossed the finish line clear and in time on Priam du Roset. Although the pair took all the outside turns he kept the team on just the 1 time faults from Thomas yesterday. Frustrated after being too slow yesterday, Thomas set off at pace on Luna van het Dennehof unfortunately they got a little deep and added 4 to the scoreboard for the team to finish on 5 faults.

The tension could be cut with a knife as Shanghai Swans took every challenge in their stride. Knowing the team had a real shot at the win today, both team members of Max Kühner on Eic Cooley Jump the Q and Christian Ahlmann with top ride Solid Gold Z opted for risk-free rounds playing it safe and producing the clear. However, they finished on their overnight score of 1 and had to wait to see if it was good enough.

A star performance from U25 rider Zoe Conter and Davidoff de Lassus for the Rome Gladiators when it really mattered gave Fernando Martinez Sommer and Cor Bakker a chance to go into the lead. Sommer set off with pace and power but an early fault immediately knocked them behind the Swans and left him trying to beat the time allowed to clinch a podium position. He did just that and they slid in front of Valkenswaard United guaranteeing them a podium.

Home team Stockholm Hearts powered by H&M We Love Horses took centre stage as last to go and the only team able to keep a clean sheet. Power duo Malin Baryard-Johnsson and H&M Indiana had a touch at the first but it stayed up and then cleared the fences beautifully finishing clear and passing the pressure onto Peder Fredricson and H&M All In. Watched on by team owners, the experienced Swedish Olmypian put his 16 year old gelding in all the right places securing a double clear and winning GCL Stockholm much to the crowds delight.

The Championship now heads straight to the buzzing capital of France, Paris 24 - 26 June where the 9th round of action will take place under the Eiffel Tower.