Sunday 26 June will see the 60th edition of the Al Shira’aa Derby take place at the All England Jumping Course at Hickstead in West Sussex. 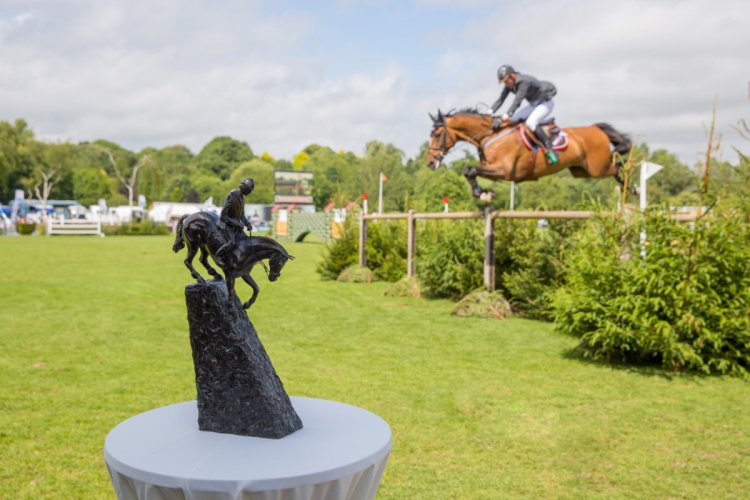 A competitor in the Al Shira'aa Derby at Hickstead, West Sussex, with the Boomerang Trophy in the foreground. Photo (c) Craig Payne

The Hickstead Derby is one of the most iconic showjumping classes in the world. It first took place in 1961, a year after the showground first opened. Hickstead founder Douglas Bunn had wanted to create a showjumping spectacle, a sporting occasion like the Grand National or Wimbledon that the public would take to its heart.

Douglas set about designing a unique course, featuring ditches, open water, rails, towering uprights and vast spreads. He took inspiration from the local landscape and from the hunting field, designing jumps that spectators could identify with and appreciate their scale. Bunn also flew to Hamburg in the middle of a snowstorm on New Year’s Eve 1960, to measure up the famous German Jumping Derby course and figure out how he could make the British version even bigger!

It was the inclusion of the 10ft 6in Derby Bank at Hickstead that caused some concern among riders when it was first revealed, with some calling it unjumpable. Despite this, around 60 riders lined up for the very first Hickstead Derby, drawn by the growing popularity of the showground and the sizeable prizemoney on offer.

Irish rider Seamus Hayes arrived at the showground in that inaugural year and announced he had ‘come to show everyone how to jump that bloody bank!’ He duly did just that, becoming the first winner of the Derby with Goodbye III. A year later, in 1962, Pat Smythe became the first lady to win the Hickstead Derby, riding Flanagan.

There have been so many standout moments in the history of the Hickstead Derby. Marion Mould, aged just 20, winning on board the pony Stroller in 1967. Eddie Macken’s extraordinary run of four wins in a row with the great Boomerang, with the pair taking the title every year from 1976-1979 – a record that has never been matched since. Burghley Horse Trials champion Anneli Drummond-Hay making the switch to showjumping and winning the 1969 Derby with Xanthos II.

There was the popular Ryan’s Son giving John Whitaker his first win in 1983, and John’s brother Michael winning three times in a row with Mon Santa from 1991-1993. Peter Charles was another to produce a hat-trick of wins, jumping clear with the grey mare Corrada to take the trophy each year from 2001-2003, while 2016 Olympic champion Nick Skelton won in 1987, 1988 and 1989.

Reigning Olympic champion Ben Maher shot into the limelight when winning the British Speed Derby and the Hickstead Derby in the same year in 2005, when he was just 22 years old. Trevor Breen winning in 2014 on board the one-eyed wonder horse Adventure De Kannan, then following up a year later on Loughnatousa WB. William Funnell joining the elite band of four-time winners in 2018, winning three times on Cortaflex Mondriaan and adding a fourth title in 2018 with Billy Buckingham. Then of course there was 2019, when Derby debutant Michael Pender won on his first attempt at the age of 19, making him the youngest winner of all time.

Perhaps the most iconic moment of all was when Harvey Smith put two fingers up at the showjumping establishment and made it into every newspaper in the land. Having won the Hickstead Derby in 1970 on Mattie Brown, Harvey returned the following year without bringing back the trophy. He claimed to have forgotten it, but Douglas Bunn felt that Harvey was arrogantly assuming he would repeat his win.

After winning the jump-off against Steven Hadley, Harvey cantered through the finish, circled and then flicked a V-sign towards the directors’ box, an act that was caught by the television cameras. He later said he was making a ‘V for Victory sign’, but the organisers were having none of it – Harvey was disqualified and his first prize of £2,000 was removed. Eventually the matter was referred to the British Show Jumping Association, and the title and prizemoney were reinstated. Smith, who remained good friends with Douglas Bunn, claimed it was the best PR showjumping had ever had.

Next week will see this iconic competition take place for the 60th time. The course is almost identical to how it was in 1960, and clear rounds are no less easy to come by. The Hickstead Derby has a dramatic and exciting history, and it’s not long to find out which rider will be added to the roll of honour in this important anniversary year.

Tickets for the Al Shira’aa Hickstead Derby Meeting (23-26 June) are on sale now from Hickstead.co.uk.