The new partnership of 17-year-old Annabella Pidgley and Gio were on dominant form at the I.C.E Horseboxes All England Dressage Festival, winning both their classes by some margin. 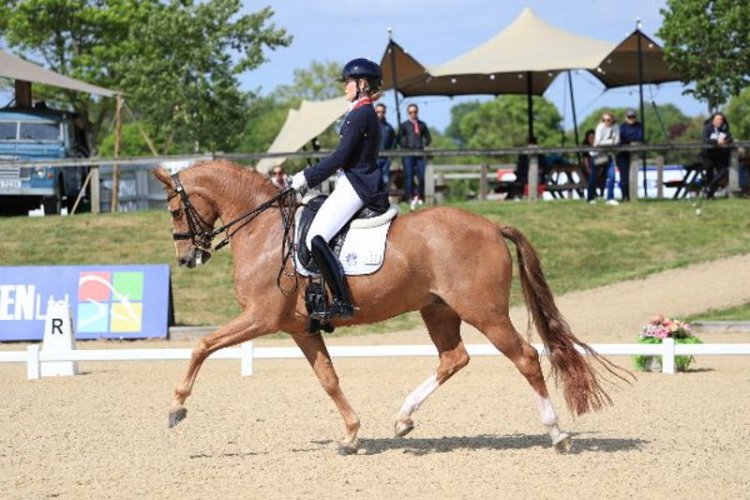 Dressage fans were excited to see them in action at the Premier League event at Hickstead, and they did not disappoint – winning the Stubben Premier League FEI Intermediate II 2009 on Saturday with 77.304%.

“He felt amazing, it was only our fourth Inter II test and it was a big improvement on our last one at Keysoe two weekends ago, especially our trot work as we’ve been working hard on putting more power in and that paid off today,” said Annabella. “He’s such an experienced horse but I’ve had to step up my riding and learn a lot.”

The pair followed up by scoring 76.383% to win the I.C.E Horseboxes FEI Grand Prix Under 25 on Saturday.

Gio was formerly ridden by Charlotte Dujardin, with the pair winning double bronze at the Tokyo Olympics before the horse was sold to the Pidgley family. “They’re getting to know each other but as you can see they’re already bonded so well,” said Charlotte, who trains Annabella. “He’s such a special horse, he gives everything, and she’s going to gain so much confidence from that.”

Charlotte was also on winning form at Hickstead, winning Saturday’s Fairfax Saddles Premier League FEI Prix St Georges with Alive And Kicking, and then the same class on Sunday with Hilius MHB. Sarah Pidgley’s 10-year-old is a recent addition to Charlotte’s string.

“This is only my second show with him and his first outdoor show,” said Charlotte, who also finished second with him in a large Prix St Georges class on Saturday behind eventual winner Henriette Andersen and Zachary. “For a horse like him who is a bit nervous and needs more exposure, it’s a great show for educating these horses and giving them confidence,” she added.

“He’s actually been off for 12 months so it was his first Grand Prix in a year, but he feels better than ever. He’s 16 now, he’s an old pro now and he knows his job,” said Gareth.

It was the first time the Australian-born dressage rider had competed at the main Hickstead site. “This show would be of a level of anything abroad, it’s horse-friendly and people-friendly, the surfaces are great and the organisers have done a brilliant job,” Gareth added.

The 13-year-old Bengal II has an unusual background for a dressage horse. “He was actually a riding school horse so I’ve trained him up myself, and he’s helped me every step of the way,” added Fay.

Despite it being the first time Gould's 11-year-old stallion Genie has done the Grand Prix Special test in competition, his score of 69.404% was good enough to win.

"He's only done three Grand Prix tests and he's been getting consistent scores but with so much more to come," said Andrew.

Empower Your Horse’s Personality: An Excerpt from ‘Training Horses the...