In a thrilling evening of top class showjumping, the Tokyo Olympic individual silver medallist and Sweden team gold medallist Peder Fredricson won the Longines grand prix at the London GCT on Saturday (14 August). But the biggest cheers of all erupted through the stands at the Royal Hospital Chelsea for the gallant runner-up, Great Britain’s […] 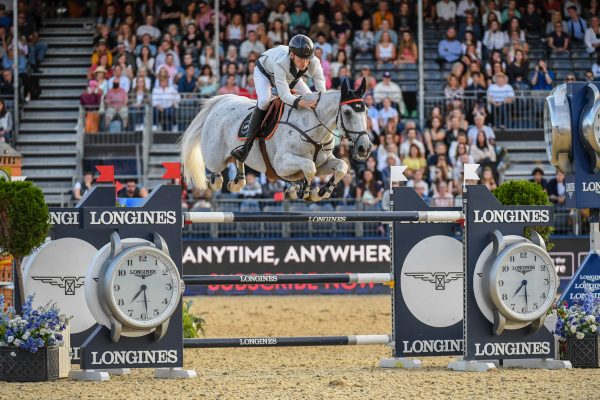 In a thrilling evening of top class showjumping, the Tokyo Olympic individual silver medallist and Sweden team gold medallist Peder Fredricson won the Longines grand prix at the London GCT on Saturday (14 August). But the biggest cheers of all erupted through the stands at the Royal Hospital Chelsea for the gallant runner-up, Great Britain’s legendary rider John Whitaker.

Six riders made it through to the jump-off and the first three riders all faulted as the tempo increased considerably – Nicola Philippaerts and his “hot mare” Katanga VH Dingeshof, Gregory Wathelet (Faut-Il Des 7 Vallons) and Christian Ahlmann with his wife Judy-Ann Melchior’s home-bred Clintrexo Z.

The first clear came from Niels Bruynseels, one of three formidable Belgian riders to go against the clock, riding Ilusionata Van’t Meulenhof – a former ride for William Whitaker – in 39.44sec.

But hot on his heels was the 2021 GCT championship leader Peder Fredricson riding Catch Me Not S, who opened up down to the final vertical to flash across the finish line in 37.93sec.

It all came down to the final rider of the evening, 66-year-old John Whitaker riding the 13-year-old gelding Unick Du Francport (pictured below) and he had the full support of the home crowd behind him. 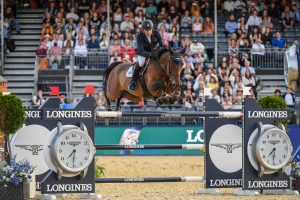 This pair have been jumping better than ever recently and they motored round the 1.60m track but, says John, the gelding just spends a bit of time in the air over the obstacles and despite a wave of cheers willing them faster, they soared home just 0.14sec slower than the Swedish rider to take the runner-up spot.

“He was there to beat – I could have beaten him – I just didn’t get the right side of him,” said John, who celebrated his 66th birthday last week. “My horse did everything I asked, he jumped perfect.”

But what a thrilling jump-off it was in the feature class of the London GCT and champagne blasted off the podium as the top three riders celebrated in style.

With Peder Fredricson already having won the Stockholm leg of the Global Champions Tour this season, the golden ticket to the Super Grand Prix in Prague in November falls to John Whitaker, who will now make his debut at this end-of-season finale.

“It’s exciting,” said John. “The past two years have been weird with Covid and I’ve been going round three-stars trying to climb the ladder a bit to get to the bigger shows. So to get in here and do really well, has boosted my moral – I’m really pleased. To come to this show with the best riders in the world and beat them or hold my own with them, it’s good for moral, it’s good for everything.”