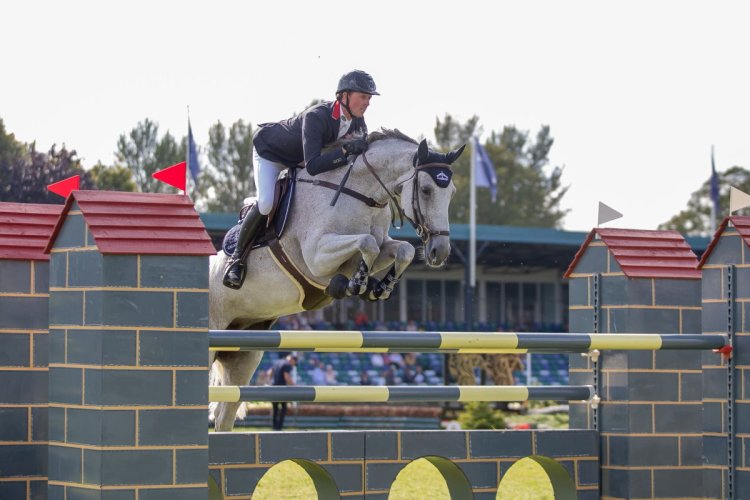 Riding the nine-year-old grey mare Enjoy CKZ, Ben made the most of his penultimate draw in the jump-off to go just 0.06sec ahead of Nicole and Miss Aragona PS and take the lead. Ben’s Tokyo team-mate Holly Smith was last to go with Don Vito II, but a fence down ended Holly’s hopes of winning, and left Ben at the top of the leaderboard.

It was the first time Ben has won the Grand Prix class at Hickstead’s All England September Tour. “What a fantastic show this is, to give these younger horses experience in the main ring – the sun is out and it’s been really good sport,” said Ben.

The win marked a return to form for Enjoy CKZ. “I’ve struggled with her a bit since Windsor, she’s a very sensitive mare, so today I thought I’d just go in and ride fast and get her confidence back a bit,” said Ben. “She really seemed to take it on so it’s been a big confidence boost for her and for me, and hopefully we’ll have an upward progression from today. I haven’t done a lot of jump-offs with her but now I know she’s naturally a very quick horse, and I learned a lot about her.”

In the Stoner Jeweller’s 1.20m Open Championship, Lottie Tutt crowned an excellent two weeks for The Billy Stud when winning aboard Billy Convincer.

Eleven of the 30 starters made it into the jump-off, but only three could produce a clear in the second round. Lottie crossed the finish in a time of 39.86sec to take the title ahead of runners-up Phoebe Farman and Iniesta II. It was a fantastic return for Lottie, who has been out of action for a few weeks.

“I’ve injured my hand so it’s really nice to get back in the ring and especially to have a win,” said Lottie. “He’s definitely one for the future. He’s taken a bit of time to mature but he’s so much stronger now.”

In the All England Novice Championship, Charlotte Foreman won on board the five-year-old mare Diamantine Z. The pair finished half a second faster than Chloe Winchester and Tisara Quality Cruise.

The show drew to a close with the All England 1.30m Open Championship, which saw seven combinations make it into the jump-off. Shane Breen looked set to add another Hickstead title to his CV, netting the quickest time, but a fence down relegated him to fourth. In the end Ben Walker won on board Fire II in a time of 41.10sec, with Pippa Funnell and Tarzan XII close on their heels in 41.99sec.

“WITHOUT OWNERS THERE WOULDN’T BE ANY HORSES”