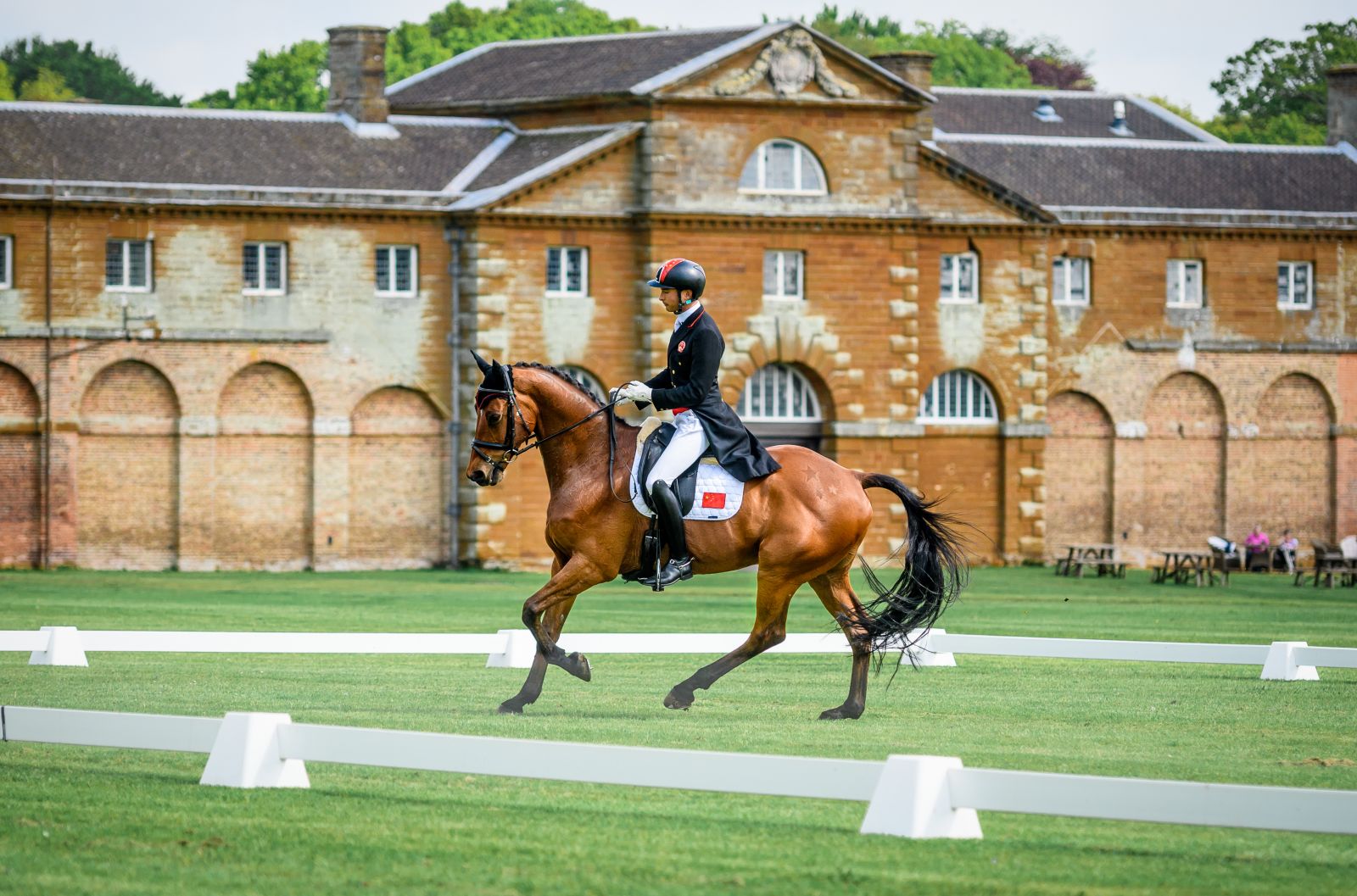 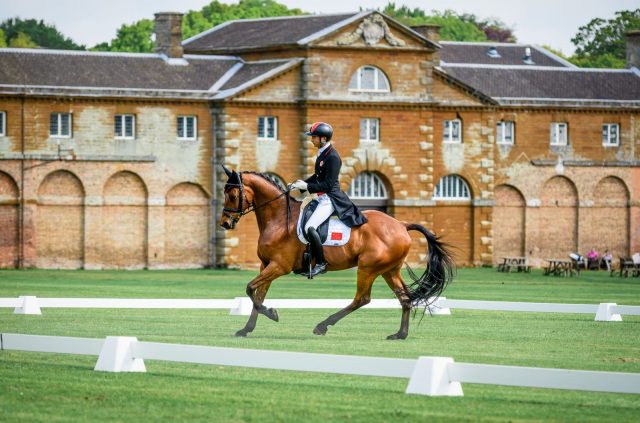 Such is the strength and consistency among the upper echelons of the British eventing scene that we’re used to seeing the same tiny handful of superstar horses lead the first phase week in and week out at four-stars. And so it’s always thoroughly exciting to see a less familiar face take the top spot and challenge this set supremacy – which is exactly what happened in day one of the CCI4*-S at Houghton International, incorporating 2021’s first FEI Nations Cup leg.

You may not yet be familiar with Jilsonne van Bareelhof, the 12-year-old Belgian warmblood who posted a 24.3 – one of just two sub-30 scores – to take a decisive overnight lead today. But you’d be hard-pressed not to know his rider, China’s Alex Hua Tian, best known for his partnership with top horse Don Geniro. Together, they scooped a top ten finish at the 2016 Rio Olympics – but Jilsonne van Bareelhof, or ‘Chocs’, as he’s known at home, “might be my favourite,” he admits. In fact, he says, “he’s the most talented thing I’ve ever sat on – he’s truly wonderful.”

Despite this high praise, only the most eagle-eyed eventing fans will have taken notice of the horse – he’s only run internationally seven times, a strategic move on Alex’s part as he figured out the best possible career trajectory for the gelding.

“He doesn’t run very often, but when he does, he’s just so special,” says Alex, who made the decision last year to produce Chocs as a CCI4*-S specialist, with an aim to campaign him at valuable short-format runs such as the Event Rider Masters series. This isn’t due to any shortage of talent, but rather, as Alex explains, a result of the extravagant gelding’s only apparent flaw.

“Basically, whatever we do with his feet, he loses shoes,” he explains. “But now that we’ve made that decision, he just thrives. He’s one of the those very few horses that’s exceptional in all three phases – and a lovely person. He’s as close to being a perfect horse as they get, but none of them are perfect!”

Chocs was originally produced by Australia’s Kevin McNab, who produced him through Novice (US Preliminary) before Alex bought the horse in 2017. By the end of the year, the new partnership had notched up two top-five finishes at Novice, and Alex decided to aim him at 2018’s Asian Games, held at CCI2*-L. Despite a spate of cancellations plaguing the early part of the 2018 national calendar, Alex fast tracked Chocs to a debut CCI2*-L at Tattersalls, where he made the best of a tough Ian Stark track to lead after cross-country, finishing eighth ultimately after dropping a pole.

“I remember going there and thinking, ‘I hope it’s a seven-minute Novice’ – but I hadn’t realised it was Ian Stark [designing],” he says with a laugh. “It was definitely not a seven-minute Novice. But he’s a serious animal – he pulled the whole way around and we were about thirty seconds under the time. He’s a very capable and ambitious horse.” 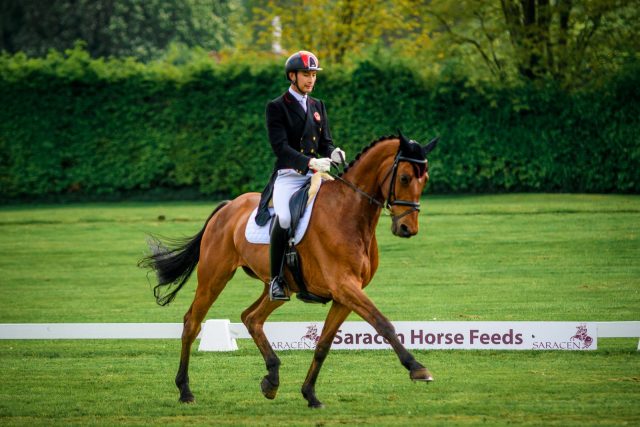 Since then, we’ve seen him jump clear in a CCI3*-S at Barbury Castle, though he was withdrawn from two other starts at the level while Alex and his team crafted a plan – and a career – to suit him. While his record and trajectory might not be the most conventional, changing the goalposts appears to have worked: Chocs debuted at CCI4*-S at Burnham Market last autumn, jumping two clear rounds for a top fifteen finish, and though he clocked up twenty penalties at the same event last month, Alex has chalked it up as a positive educational moment.

“He was more interested in going than looking — he just flat out galloped past a triple brush without looking,” laughs Alex. “But I think he learnt from it.”

Today’s score is an international personal best for the gelding, and marks the latest in a decisive downward trend in his marks: he posted a 29.4 in his last CCI3*-S at Barbury in 2019, a 27 at Burnham Market last year, and a 26.5 at Burnham Market this spring. This shift, Alex explains, has come as the inexperienced horse learns to focus and settle into his season.

“He can be a fresh bugger,” he says. “He can do a stunning test, but if he’s wild, he’s wild. But now that we’ve made the decision to keep him as a four-star horse, he’ll be run much more consistently. The issue he’s always had is that because he gets fresh, and because he runs so little, when we do take him out it’s all very exciting for him. This takes the pressure off a little bit, and he should find it a lot easier. That’s where the consistency today came from – he ran at Burnham Market, he’s stayed in work, and it’s all gone better.”

As a result, Alex found a new degree of rideability – and with it, the chance to push each movement for a higher degree of expressiveness. 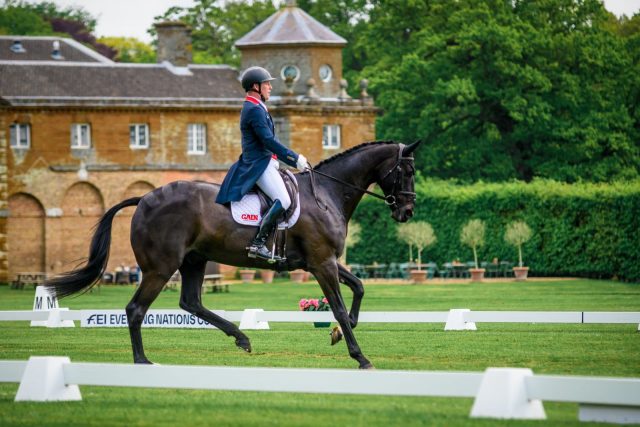 Oliver Townend and Tregilder produced the only other sub-30 test of the day, delivering a smart 27.7 to sit second overnight. This is a welcome return to form for the established four-star horse, whose scores tend to fluctuate – we’ve seen him go as low as 22.9 at this level at Burgham last year, and as high as 38.4, and his last two tests have split the difference at 30 and 31.1. Though two more packed sessions of dressage will likely yield a spate of competitive scores to challenge the current leaderboard, today’s judging proved that riders will have to work hard for every mark – and so the strength of Tregilder’s work today is promising indeed for the eleven-year-old British-bred Sport Horse. He won on his CCI4*-S debut at Blair Castle in 2018, and Oliver will be looking for a golden opportunity to bring this up-and-comer back into the spotlight.

Selina Milnes holds third place with her reliable Iron IV, who led for much of the day on a very respectable 30. Like Tregilder, Iron’s previous form has seen him dip into the 20s, including a 25.6 at Bramham in 2018, but he’s tended towards an upward trajectory since then and is generally a low-30s contender. Now, as he looks towards his first international run of 2021, he could well be on track to add another placing to his record.

Ireland’s Susie Berry sits fourth on 30.5 with the fresh and enthusiastic John the Bull, who scored a 30.5 after Susie tactfully piloted him through the test. Though she may not have been able to push for the extravagance this game little horse is capable of, her strong early showing for Ireland should set a precedent for her team ride aboard Ringwood LB on Saturday morning. Just a hair’s breadth behind her sits another young up-and-coming rider, though this one a Brit – Heidi Coy and Royal Fury round out the top five on 30.6.

Tomorrow will see another full day of dressage tests from non-team competitors, while Saturday morning features a short head-to-head between the three Nations Cup teams before the showjumping commences after lunchtime. Great Britain, Ireland, and Australia will battle it out for valuable points in this pivotal first leg – here’s how those teams break down: 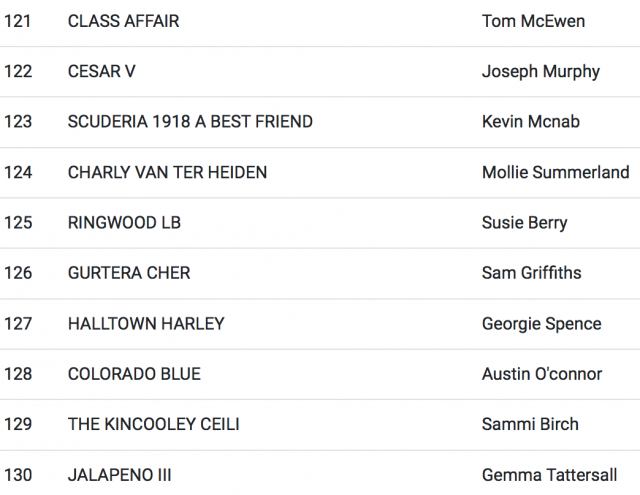 The top ten after the first day of dressage in the CCI4*-S at Houghton International.