The sun came out for the second day of competition at Aspen Farms Horse Trials in Yelm, WA, where more than three hundred horse and rider combinations contested show jumping or cross-country jumping in eighteen 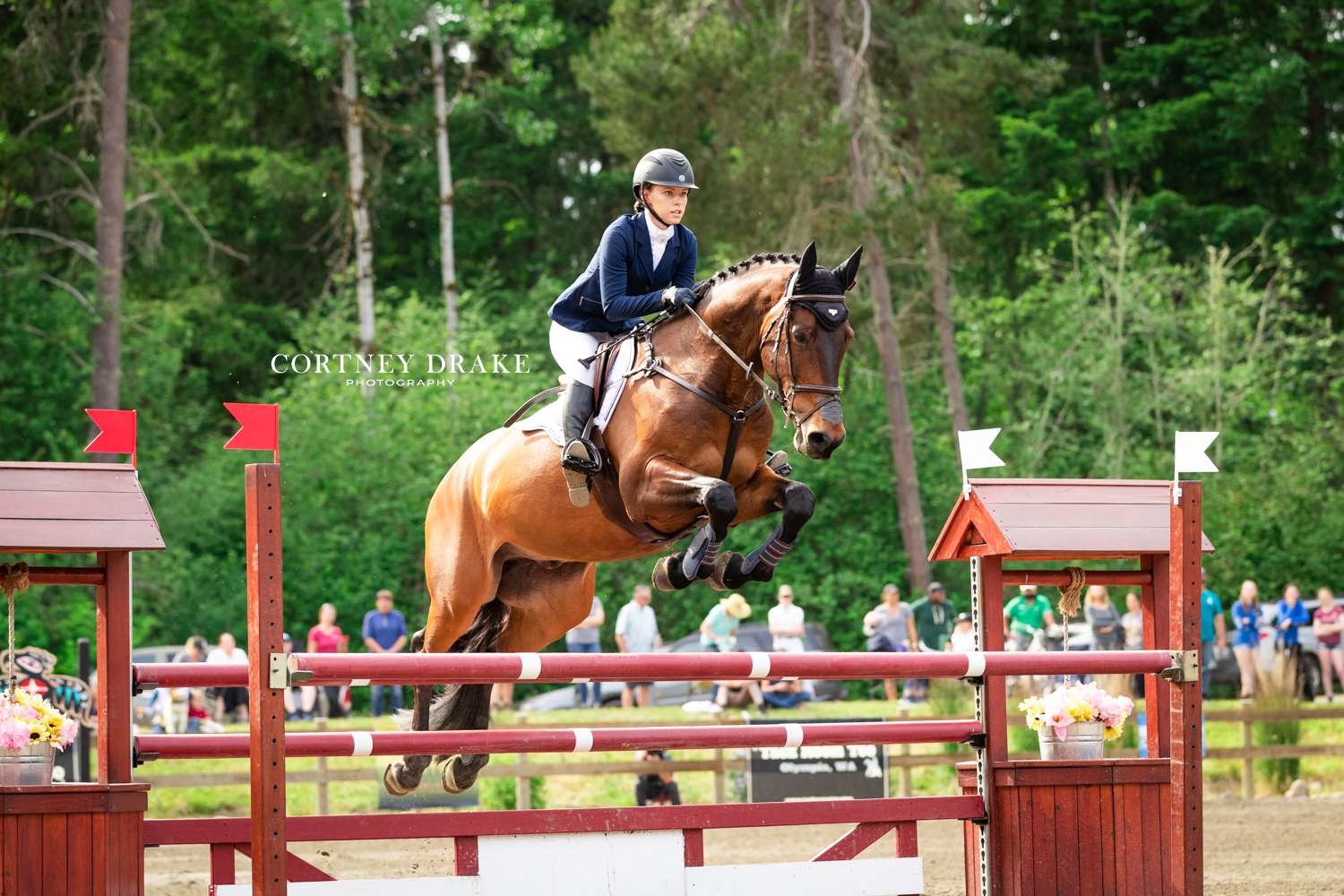 The sun came out for the second day of competition at Aspen Farms Horse Trials in Yelm, WA, where more than three hundred horse and rider combinations contested show jumping or cross-country jumping in eighteen horse trials divisions from Beginner Novice through Intermediate as well as an FEI CCI2*-Short and CCI3*-Short. Many competitors and visitors came to watch the CCI3*-Short division take on Chris Barnard’s show jumping track in the Tack Room Too sand arena. Before the start of the division, the show paused for a moment of silence in remembrance of three special Aspen Farms team members who passed away: Piper Cheney, Jean Moyer, and Tremaine Cooper. They each helped make the Aspen Farms Horse Trials a special event for all, and they are greatly missed. 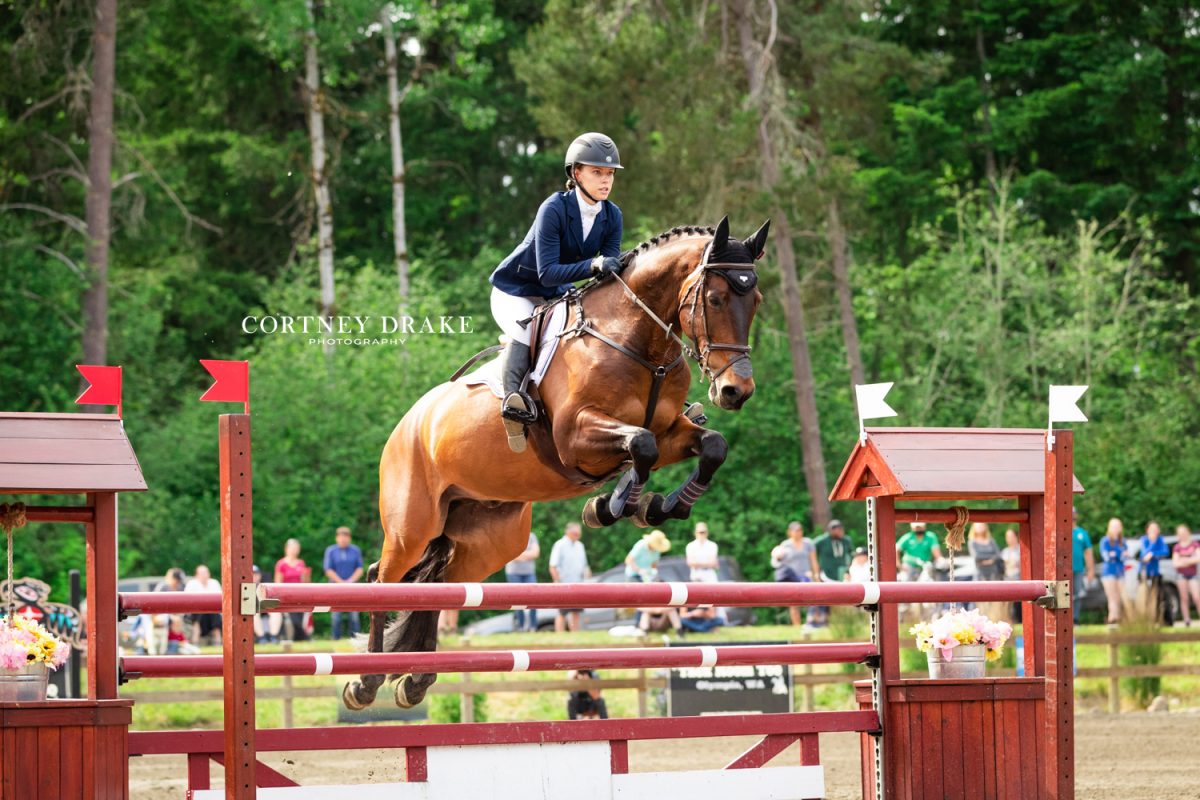 Young Rider Hayley Turner and her 11-year-old Irish Sporthorse gelding, Shadow Inspector (pictured above), delivered a clear round in the CCI3*-Short show jumping to move up from second to first on their dressage score of 27.1.

“He was jumping really well,” said Turner after her stadium round. “He was a little bit strong, so I had to get him back at times, but he was super.”

“The course looks good,” said Turner. “It will go however it feels while you’re out there tomorrow, with all the rain predicted tonight.”

Alexis Helffrich and Rose Sullivan’s Belgian Warmblood gelding, M Creme De La Creme SE, put in a clear show jumping round to move up from fifth to second in the CCI3*-Short on a score of 29.5.

“He can be a bit looky, and with all the spectators there, it was a big experience for him,” said Helffrich. “It was great; I was really happy with him.”

Helffrich is also placed tenth in the CCI3*-Short with Peggy Moore’s Oldenburg gelding, Graceland’s Lincoln. Looking ahead to tomorrow, Helffrich said, “I think the cross-country course is great. It’s really fair. The footing looks great. We’re supposed to get quite a bit of rain, so we’ll see how that goes. But I thought the track looks really good. Very pretty; really horse-friendly; impressive.”

Marc Grandia and Compari FFF, owned by Team Rebecca, LLC, moved up four spots thanks to their clear round and are currently third in the CCI3*-Short on 30.6. Dani Sussman and her own Jos Bravio are fourth on 33 after one rail down. 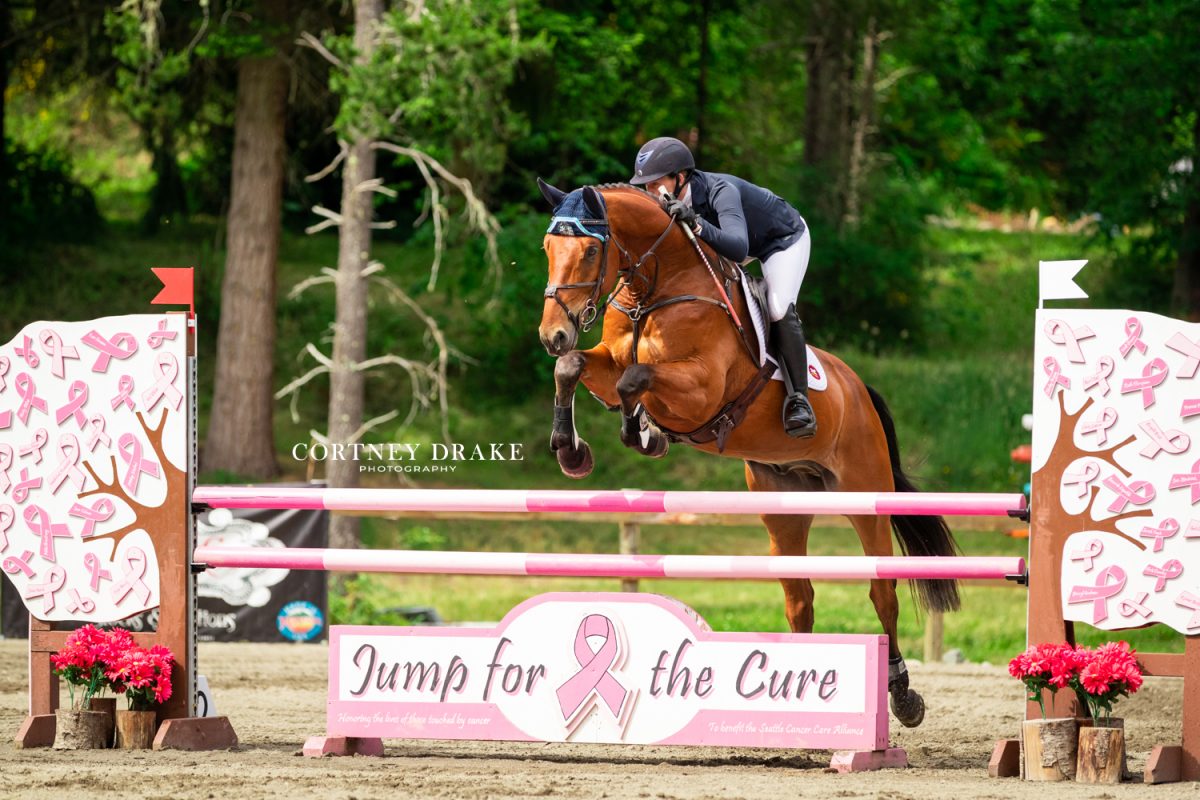 Thanks to their competitive dressage score, Amber Birtcil and Keep Calm (pictured below) moved up to first place in the CCI2*-Short despite one rail down at the brick wall in show jumping yesterday.

“I thought he was very good,” said Birtcil. “He’s definitely a little bit spooky and green, and he gets a little skittery at times, which is for sure what happened at the wall, but he is only six. He has a very bright future, and I was very happy with him.”

Of the cross-country course, Birtcil said, “I think it looks great. I think a lot of it will depend on how much rain we get. But I think regardless, it will be a great experience for him.”

Stephanie Goodman and her own Carolina Morning jumped clear to move up two placings to second on their dressage score of 28.5.

“I was so excited,” said Goodman after her show jumping round. “[Carolina Morning] just came back from an injury, and he jumped great.”

Tomorrow Goodman will pilot Carolina Morning around the CCI2*-Short cross-country and Drs Resolute around the CCI3*-Short. Goodman said, “The 2* and 3* courses look awesome. There’s a lot of skinnies, a lot of hold-your-line questions, but really fun and safe questions. If you don’t hold your line, you’re still going to come home with a healthy horse. It looks great.” 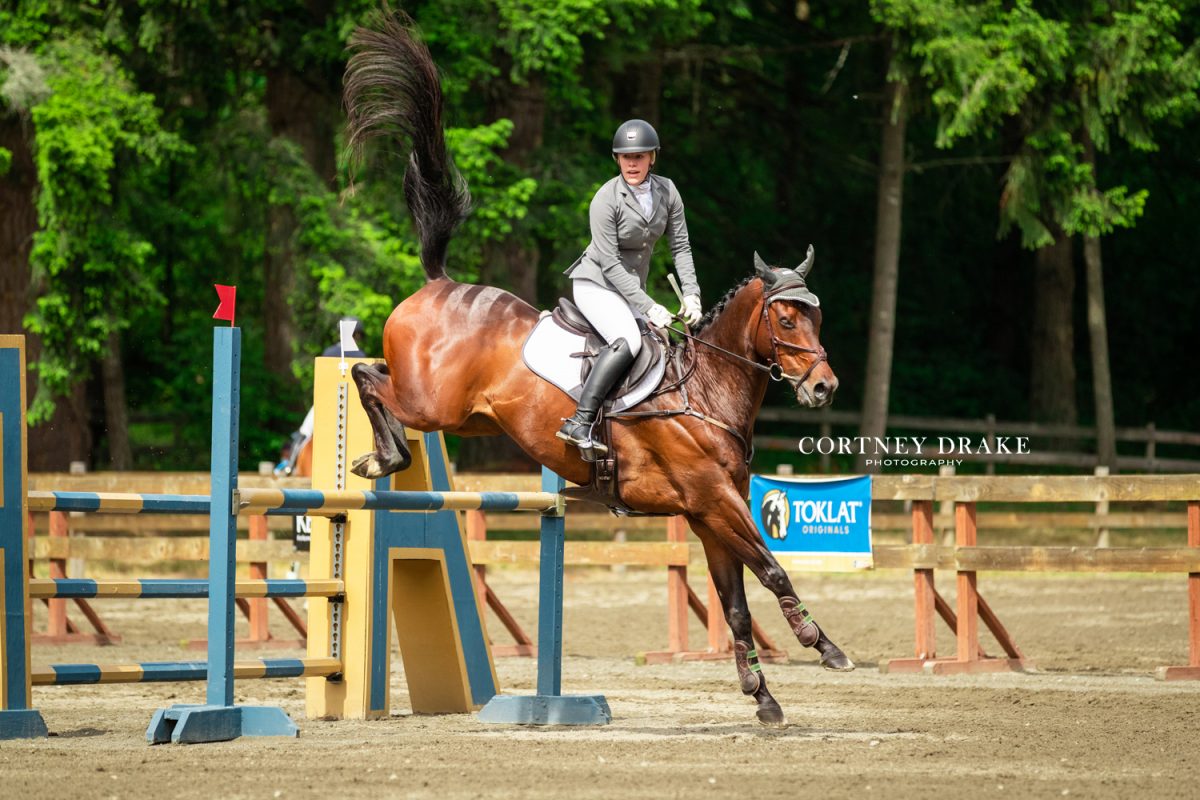 Kayla Dumlar and Faramir (pictured below) are sitting fourth overall in the CCI2*-S on a score of 29.8. They are the highest placed YTC competitors in the division.

“I thought it was a really good round,” said Dumlar. “He tried super hard for me. There were a few places he needed some help–he is still pretty green to this level–so I’m really happy with how he jumped and how hard he tried for me. We helped each other out in a few places.”

Reflecting on the new YTC program, Dumlar said, “I did NAYRC in 2019, so this is a little different, but I think it’s a great experience, and it’s giving more young riders more of a chance to compete in a high caliber team like this. It can be really expensive traveling across the country, so I think this is a great opportunity to give everyone more shows.”

Abigail Cochran and Mixologeigh (pictured above) are the second-best placed pair in the CCI2*-Short YTC on a score of 32.8. They added 4 show jumping faults to their dressage score, and are sixth overall in the CCI2*-Short. 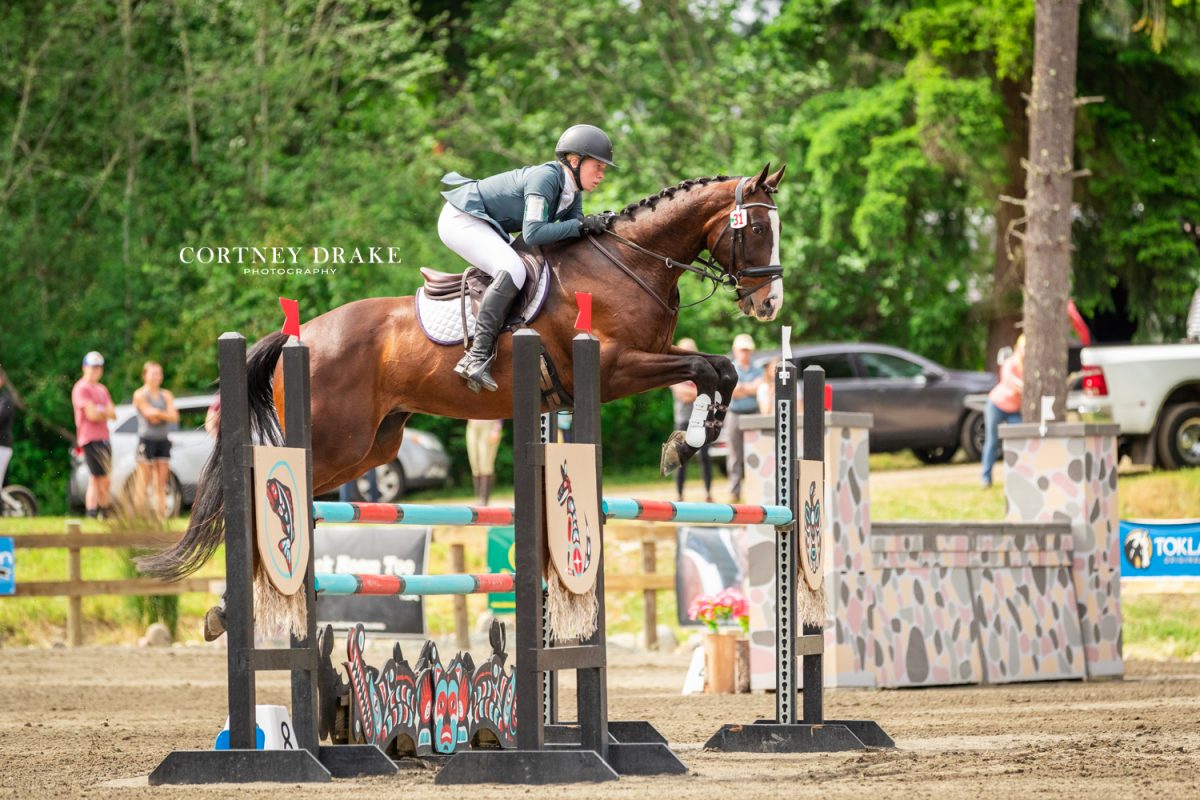 “He felt great,” said Cochran after her show jumping round. “We’ve always struggled a little with show jumping, so I’m really proud of him. He came back to me and listened, which is all I could ask for. We’ve worked on show jumping a lot this season, and he’s improved so much, I couldn’t be prouder.”

Reflecting on the YTC, Cochran said, “It’s always been a goal of mine to be a part of this type of team, and it’s really helped me work hard to get there. I’m just so happy to be surrounded by the best people. I love everyone on my team. I’m so glad to be able to do all this fun stuff with them. It’s really like a community.”

In the CCI3*-Short YTC, Haley Turner and Shadow Inspector lead, followed by Sophie Click and Quidproquo, and then by Alina Patterson and Flashback. 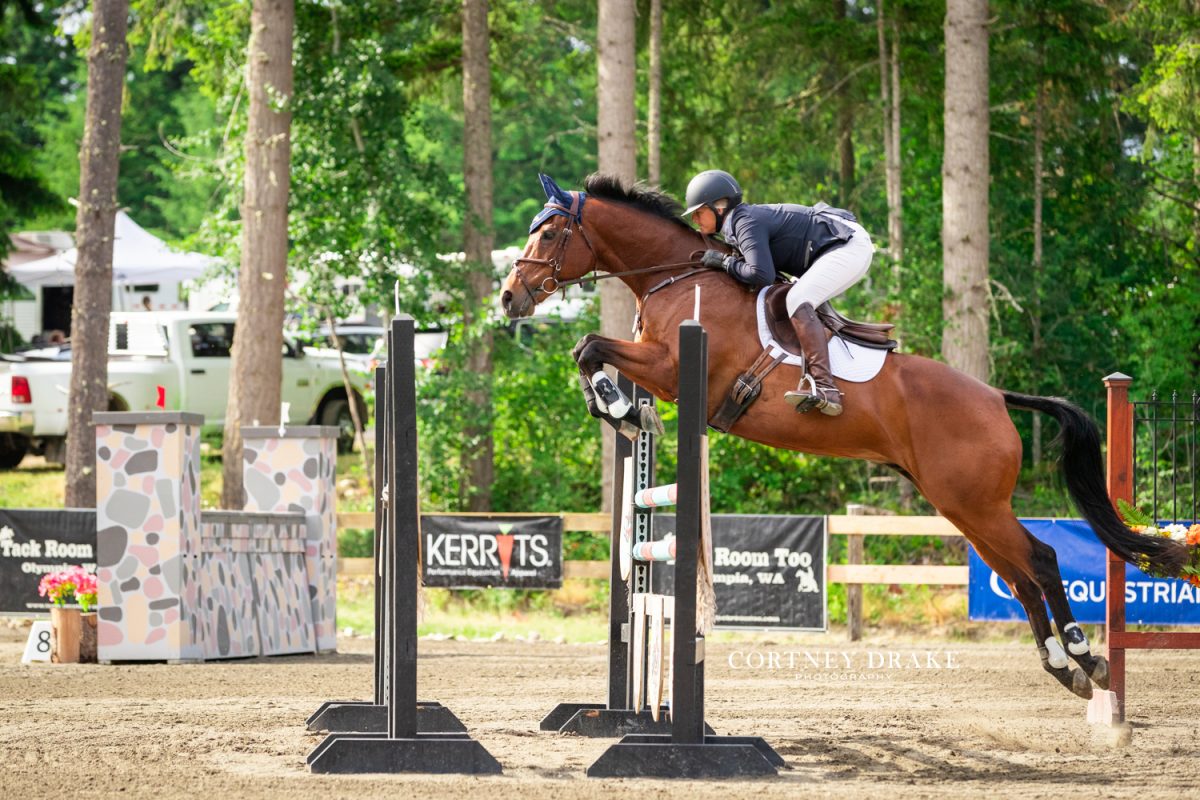 On Saturday the horse trials divisions from Beginner Novice to Intermediate contested either show jumping or cross-country.

In Open Intermediate show jumping, Melissa Nice and Fun and Games (pictured above) maintained their lead, adding 4 jumping penalties to their dressage score. Anna Collier and Resolve It also added 4 faults; they are second on a score of 37.3. 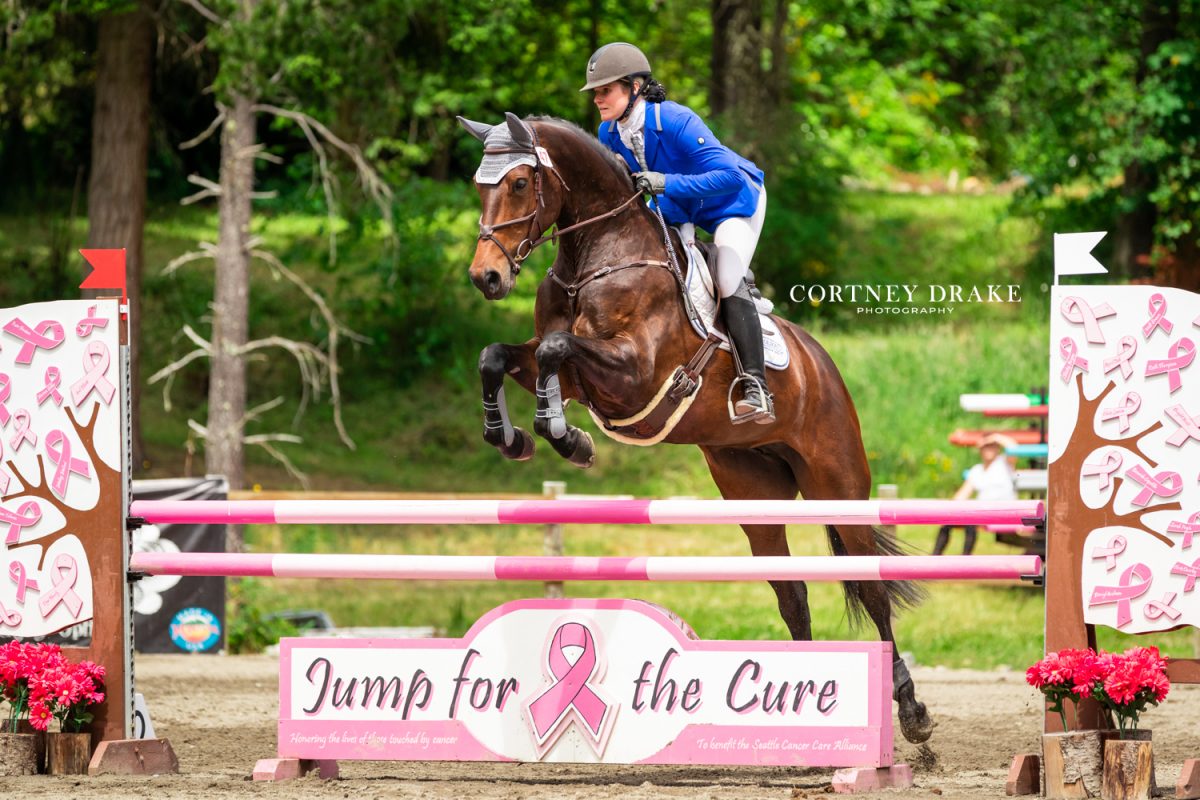 Jordán Linstedt and Lovely Lola maintained their lead in Open Preliminary. Meg Finn and Ardeo Audacity moved up from fourth to second thanks to their clear show jump round, and Marc Grandia and Alchemist II moved from fifth to third.

In Preliminary Rider, Madison Langerak and Normandy Kivalo maintained their lead on 23.3. Mia Richerson and Whats That Sports moved up to second from fourth on their dressage score of 32.6. 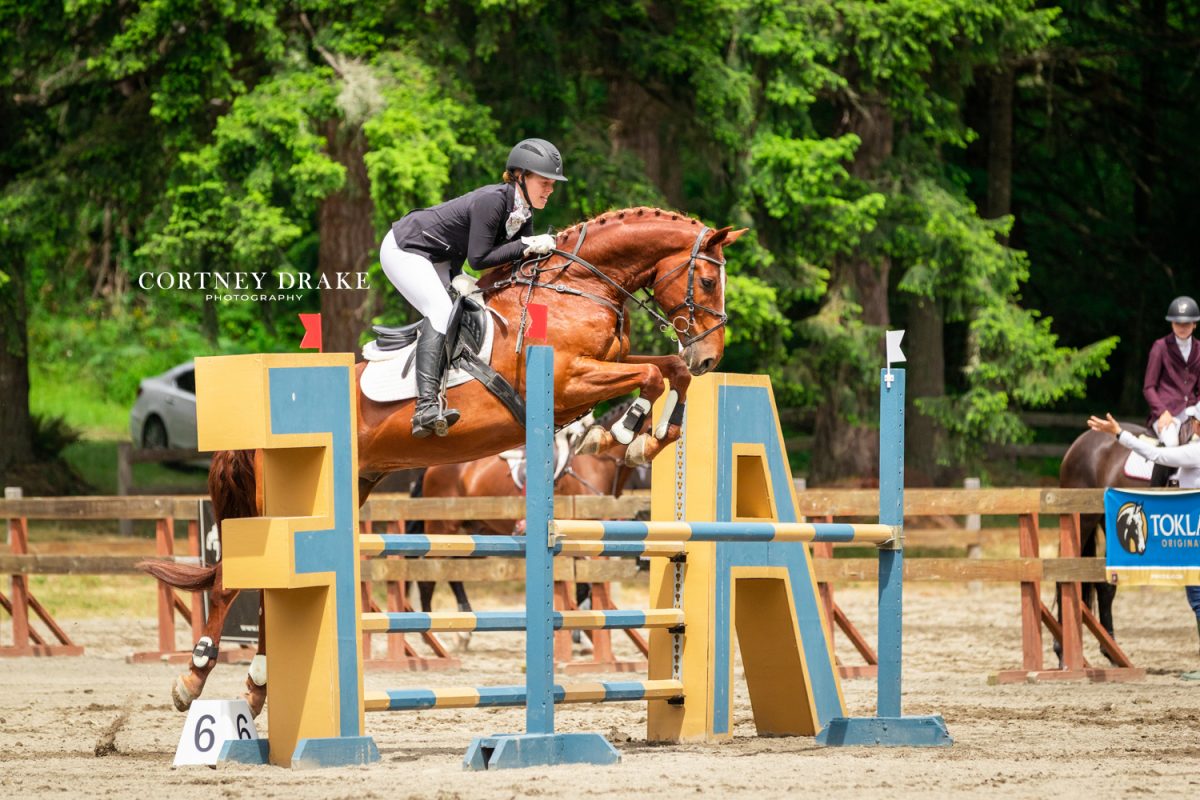 The jumping today shook up the leaderboards after dressage in the five Training level divisions. Only Amber Birtcil and Kingston V.E. in Training Horse A and Dane Padgett and Cafe Noir in Junior Training were able to maintain their dressage day leads after jumping. Kelsey Devoille and Cute Casalita and Sabrina Glaser and Rather Be Cooley are tied for first in Training Horse B, Amy Click and Rubia lead Training Rider A, and Kate Helffrich and Coquette lead Training Rider B on 25.5.

In Beginner Novice Rider, Alisa Sprouffske and her off-the-track Thoroughbred, Trick Silver, moved from fifth to first after their clear cross-country trip.

“The course rode great,” said Sprouffske. “Very inviting, you could ride forward. I had to trot down the hill because he was a little strong, and I knew we would have time faults if we went too fast. But he felt great.”

“I was really happy with her,” said Lorenz. “Last year I didn’t get to show, so this is her first season out eventing. She’s a little older than normal–she’s six. So I’ve been focusing on dressage before this. It was nice to be able to lay it down. She’s ready to move up another level, but I didn’t know how she would go because she hasn’t left the startbox at a real event. She was great.”

Sunday will conclude the three days of competition. Over $25,000 worth of cash and prizes will be awarded to top finishers.