And their leading rider, Michael Jung, maintained his position at the top of the individual leaderboard with a thrilling performance from the 14-year-old gelding fischerChipmunk FRH.

The big crowd of 22,000 spectators were gripped with excitement as a total of 87 horse-and-rider partnerships tackled the challenging 30-fence track set by course designer Guiseppe della Chiesa, with 72 completing the course, 11 coming home inside the time, three retiring and 13 eliminated.

The defending champions from Great Britain dropped from pole position after the dressage phase down to bronze, while Team USA moved up from third to silver medal position. However the margins are really tight with just 1.3 penalty points separating the Germans on a tally of 76.1 from the Americans on 77.4 when each team’s best three scores are counted. And on a running tally of 80.9 the British are just 3.5 points further adrift and just over a fence behind Germany when the action resumes tomorrow morning at 11.30 local time. The final day of showjumping promises to be a truly gripping affair.

The British began to lose their grip when second-line rider Laura Collett and her Tokyo 2020 Olympic gold-medal-winning ride London 52 had a glance-off at the last element of the KEP Italia Slide at fence seven to plummet from individual second to 48th place. The long, steep slope from the log at the top was followed by two narrow brush fences.

"“He was too fresh and too well in himself, he jumped off the top very boldly and he thought he was doing the right thing because he locked onto the skinny from the top of the hill and took me down to it and over-jumped"

I needed to anchor him for the three strides but he just ran out of room”, the disappointed rider explained.

Defending individual world champion, Ros Canter, had kicked off the British effort with a spectacular run with Lordships Graffalo who galloped through the finish well inside the time so British hopes had been high. “He is just a phenomenal cross-country horse, he’s only 10 years old and it feels like child’s play to him! He experiences hills like that all the time at home whether he’s hacking or cantering so I knew he’d be able to keep his speed or accelerate up the hills and I think that’s key”, she explained.

Collett’s mistake however piled the pressure on her Tokyo 2020 team-mates Tom McEwen and Oliver Townend, and British hearts missed a beat when McEwen was initially given 15 penalties for missing a flag at the notorious fence seven Slide. As it turned out he was right when he said these would be removed on further investigation later in the day, but he still had to add the 4.8 time penalties he collected with the hard-pulling Toledo de Kersker and despite a wonderful clear from Townend and Ballaghmor Class the drop down the leaderboard was inevitable.

World number one athlete Townend said the cross-county course was “a very fair and cleverly designed test but I don’t think it particularly suits some of the older horses such as London, Ballaghmore Class, Toledo de Kerser who have been around big 5-Stars like Badminton and Burghley because this is definitely smaller dimensionally and you are up and down the hills and the terrain is tough. They want big open courses that they can attack”, he pointed out.

Meanwhile Team Germany just cruised into the lead even though pathfinder Christoph Wahler, who also had the unenviable task of being first out on the course this morning, picked up 9.6 time penalties with Carjatan S and said he didn’t enjoy the experience. “On a course like Luhmuehlen he flies, on a course like this he has to dig really deep”, he said.

In complete contrast the second man out, Ireland’s Sam Watson (SAP Talisman) said, “I really enjoyed that even though it was hard work. If it’s not hard work we all go clear in the time and then today doesn’t matter so much. This is high performance sport and I think you have to be a genius now to push us out of our comfort zone and make it horse friendly to jump around. The course designer for me has done his job. It’s a very safe track to jump but it’s a hard track to ride, congratulations Guiseppe!”, he added.

Like many of the 16 competing nations Team Ireland’s target from the outset is to fight for the one of the seven team qualifying spots on offer for the Paris 2024 Olympic Games, and a gutsy effort from all four team members today rocketed them up from twelfth to a very competitive fifth place on a score of 105.0.

New Zealand’s Tim and Jonelle Price (Falco and McLaren), Monica Spencer (Artist) and Clarke Johnstone (Menlo Park) lie ahead of them in fourth place on a competitive score of 88.3 while Switzerland lies sixth (109.4) and Japan is in seventh (111.9) after the first two phases.

Germany really got into gear when 2014 world champion Sandra Auffarth delivered a masterclass with the 13-year-old Viamant du Matz. “We had a perfect run, super from beginning to end!”, she said. “My last run was in Aachen and he felt great there and it was the same here, there was nothing I was worried about it felt cool!”

Then reigning Olympic champion Julia Krajewski came home six seconds inside the time with Amande de B’Neville before Michael Jung put the icing on the cake with another of the extraordinary rides that have earned him the nickname “Super Michi” on his home turf.

"He was great yesterday in dressage and today he was like a machine!"

said the German superstar. “At the end he was so super galloping and felt like he could do it all again! I was staying on the brake most of the way, I tried to keep him relaxed, and it’s fantastic how quickly he can think, he’s a big horse with a big stride and at that 7abc fence he was so super that I could jump the two hedges with a little smile on my face!”

Meanwhile the Americans added just the 0.8 time faults picked up by Will Coleman and Off the Record to their scoreline to overtake the British. Lauren Nicholson and Vermiculus collected 5.6 time faults but both Boyd Martin and Tsetserleg TSF and Tamra Smith and Mai Baum were clear and quick. And Smith goes into tomorrow’s final jumping phase with Mai Baum in individual bronze medal spot, only 0.8 behind British individual Yasmin Ingham who added just 1.2 time penalties to her scoreline with Banzai du Loir today.

“I have an unbelievable magical unicorn in all three phases!”, Smith said. “He’s the horse of a lifetime and he’s made a lot of dreams come true. I will take care of him tonight, he felt great to the end, and I know his heart is as big as mine so he’ll give me everything he has tomorrow!”

In her very first championship Ingham can hardly believe she is stalking the mighty Michael Jung so closely going into the final day. “I could never have dreamed of being in this position!”, she said. “My horse deserves it so much, he’s just an incredible all-round horse and touch wood tomorrow he will show everyone that he really is the ultimate event horse!”

But Jung has his eyes set on his second world title and he’s so very hard to beat. He posted a record winning score in 2010 in Lexington, USA and if he stays on his tally of 18.8 tomorrow he’ll beat that. Can he do it?....”we will see” he said tonight with a wry little smile…. 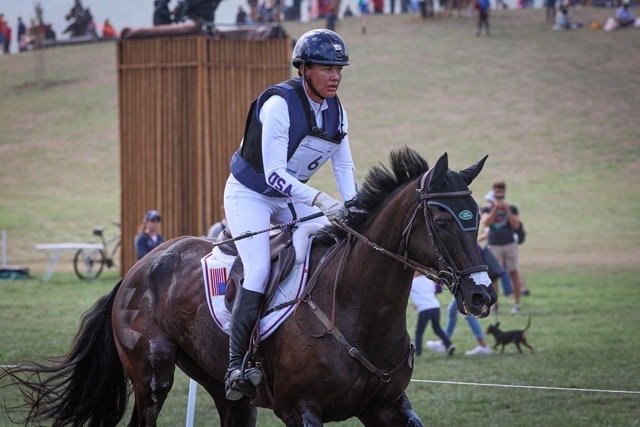