A compact but accomplished field lined up for the finale of the 2022 FEI Dressage Nations Cup™ series at Falsterbo (SWE), including the top two teams in the standings, but that didn't stop Denmark from running away with the competition. 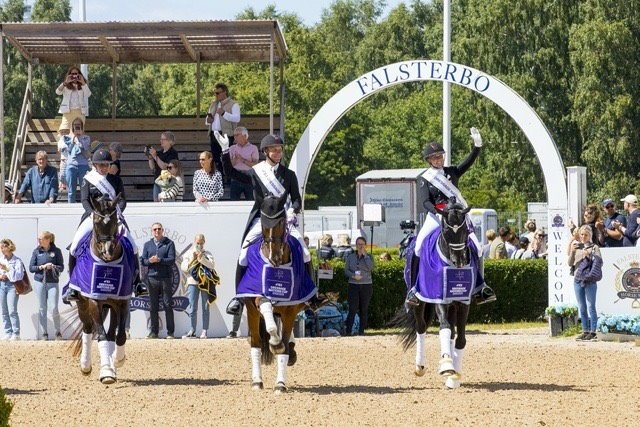 The win marked a second straight victory for the Danish squad after triumphing in Aachen two weeks ago.

"There has not been one ride we came away [feeling poorly about]. Everyone really delivered. I'm so proud to be a part of this team."

Sweden's Patrik Kittel shined individually aboard the 14-year-old Oldenburg gelding Blue Hors Zepter, winning the Grand Prix (75.261%) and finishing second in the Freestyle (80.865%), but it was not enough to hold off Denmark. In fact, Danish riders took up two-thirds of the podium in every test.

They shared the wealth. Bachmann Andersen performed best for his team in the Grand Prix, finishing second with Zippo M.I. on a score of 75.043% before topping the Special on 73.723%. Both scores were personal bests for him and his 10-year-old mount.

"He's quite a green horse. This was just his sixth show at the Grand Prix level," Bachmann Andersen said. "He's shown a lot of quality, and and he's improved since his last show. Overall, I'm happy with his development. He has had a good experience here. It's all a part of the journey."

Nanna Skodborg Merrald stole the spotlight in the Freestyle, taking the win with 11-year-old Blue Hors St. Schufro in what was the stallion's debut in the test. Inexperience did not prove to be a hindrance, as the pair received a top score of 81.080%.

"I'm really happy and really proud of [my horse]," Merrald said. "He's still very green, and this was his first Grand Prix Freestyle ever. It's not a freestyle I've made for him, so there was a little bit of improvising. In the end, he did really well. There were some small misunderstandings, but overall, I had a clean test without big mistakes, and I'm really happy with that."

The win leaves the squad feeling confident as they make their final preparations for the upcoming FEI World Dressage Championships on home soil in Hernig (DEN).

"It's always fantastic to have a Nations Cup, where you can come out and train to be a team and compete as a team before going out for a World Championship," Bachmann Andersen said. "It's always bigger pressure riding for an entire team, and it's good to be trying out different combinations and see how everyone is riding on a team."

Although finishing third, Sweden still came away with a victory, having secured the 2022 FEI Dressage Nations Cup™ series title before competition began. With less than four teams competing at Falsterbo, the event did not count for series points. Sweden, also finishing on the podium at Compiègne (FRA), Rotterdam (NED) and Aachen (GER), completed the season with 37 points. The Netherlands finished second on 24 points, with Spain third (20 points).

"We were very strong from the beginning. At every show, we had a different team, and that is a strength of the country to have four different teams and be on the podium every time," said Sweden's chef d'equipe Bo Jena. "The experience we get from Nations Cup competitions are [ones] we take with us to the next show, the next year and for the future."

Vet team running, riding and cycling distance of Kyiv to Poland for Uk...