July 26, 2022. Franklin, Tenn. Twenty-year-old U.S. show jumper Brian Moggre has been knocking people’s socks off for several years now. That’s been especially true the last two summers soaring on the senior Nations Cup circuit in Europe and now with news of his spot on the NetJets US Show Jumping team for the FEI ECCO World Championships in Denmark next month. 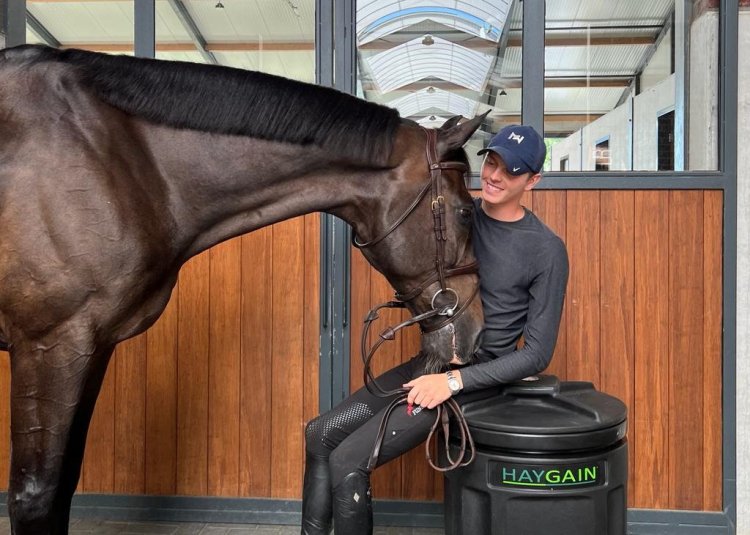 The native of Flower Mound, Texas, will be riding the Oldenburg stallion Balou du Revention, the USEF’s 2021 International Horse of the Year.

Brian’s rocket ride to top sport is fueled by a simple conviction. “I realized at a young age that treating a horse like they’re special is what makes them special,” he told the Chronicle of the Horse early this year.

Since stepping onto the international stage, Brian has come to define “special treatment” as treating his horses as elite athletes. “I’ve learned that there is so much more that affects our horses beyond training.”

Deep dives into all aspects of his horses’ health parallels Brian’s ascent and respiratory health is a particular focus. That’s partly thanks to his long-time star: MTM Vivre Le Reve.

In early 2021, Brian didn’t know if “Erkel” would ever compete again. The Westphalian gelding suffered a life-threatening lung infection that required several months of intense veterinary care. Brian was completely happy just to have have him back – even if the rest of Erkel’s life would be spent in pasture. A year later, Erkel and Brian were enjoying sustained successes on the Longines Global Champions League Tour.

Easy Breathing For All

Having one horse with severe lung issues catalyzed Brian’s keen interest in equine respiratory health and its effect on the performance and well-being of all his horses. Asking questions of veterinarians and fellow riders on the top circuit, Brian quickly came to Haygain High Temperature Hay Steaming.

“Haygain definitely played a huge part for Erkel,” Brian explains. “And having Balou being 16 and traveling so much, it’s huge for him, too.

“But the biggest thing for me now is knowing that our horses have bacteria- and dust-free hay wherever we are stabling at a show or laying over. Outside of bringing our own hay everywhere, it’s the only way to keep the hay as consistent as possible and to be reducing the dust, mold and allergens in hay. That is super important to me. There are so many variables when you travel as much as we are. Haygain takes one of those variables out.

“We used to wet their hay, but that washes the nutrients out. Steaming keeps the nutrients in the hay and that is critical for horses at this level of the sport.”

Haygain Steamed Hay also tastes good. That’s been proven in studies and Brian sees firsthand evidence in a few of his horses who struggle to maintain their weight. “It’s been great for our picky eaters because they like the hay. We don’t have to keep pumping them with grain to keep their weight on.”

As a junior, Brian counted on his excellent trainers to determine most of the care for his horses, the norm for young riders in America. At 18, he turned professional under the Major Wager, LLC banner and those decisions became his own.

His first decision was a smart one: bringing Lesley Leeman on as barn manager. Her mandate is treating horses as individuals with distinct personalities and physical needs and following the latest science in horse care.

“Lesley has taught me so much and we are both into looking at research and listening to what other people have to say,” Brian explains. He’s treated the European circuit as graduate horsemanship school, asking question of the many professionals to whom he’s long looked up and with whom he now rides alongside and against.

“Nobody is ever going to criticize you for asking questions,” Brian states. One of those he questioned is now his coach and teammate, US Olympian Laura Kraut, and her British Olympic partner Nick Skelton. “That’s how our relationship started!”

Leading high performance veterinarian Emmanuelle van Erck Westergren is another go-to for Brian’s horse care queries. Based in Belgium, near Brian's Netherlands base, Dr. Westergren pioneers respiratory health research and education regarding its role in high performance horses. She recommends Haygain Steamed Hay for all clients.

Dr. Westergren’s research includes a 2018 study in which 88% of over 700 active sport horses were determined to have some form of respiratory challenge. Further, the study found that horses fed Haygain had a 65% reduced risk of inflammatory airway disease.

Brian maximizes knowledge absorbed from others by blending it with what’s gleaned from tuning closely into his horses. “You might think you are hyper-fixating on something, but listening to them, hearing them while they work, how they are breathing, how they are reacting to their work in different environments while you maintain their consistent routine. Taking note of all those things is something I really recommend to everyone.”

Elite equine athletes benefit from the same attention to detail as elite human athletes. “It’s common in that world to think of how they treat their bodies, to be so conscious of everything they put into their bodies,” Brian observes. “You might think, ‘Oh a horse is just an animal,’ but ‘just an animal’ doesn’t do what our horses do.”

He and Lesley’s approach is always proactive. “It’s not necessarily that one of our horses has a problem with something: it’s about looking at what is happening on the inside of our horses that can help on the outside. Every day we are thinking how we can take better care of our athletes.”

It’s fitting that Erkel’s show name translates from French to “Living the Dream.” It was a tribute to his dad’s favorite saying: “Any time someone would ask my dad how he was doing, he’d say ‘Living the dream’,” Brian shares. His parents, Martin and Treena Moggre, top a list of supporters Brian credits as critical to his success.

The 2020 recipient of the USET’s Lionel Guerrand-Hermès Trophy for exemplifying sportsmanship, horsemanship and potential, Brian embodies his father’s motto better than anyone could have dreamed.