In the perfect prelude for Sunday's €300,000 Grand Prix, it was Abdel Saïd and Arpege du Ru who beat Daniel Deusser to the top spot by more than two seconds in today’s 1.50m 5* ranking class. 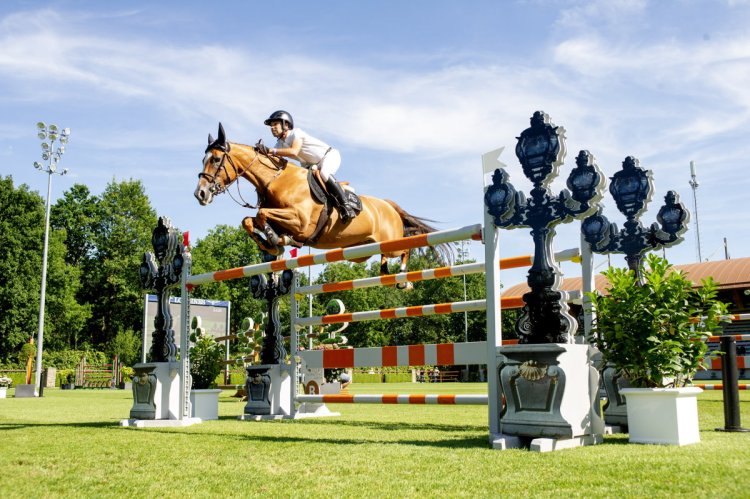 Germany rounded off the top three with Chrsitian Ahlmann and Calvino just half a second slower than Deusser and Kiana van het Herdershof in 66.67s. There were thrills and spills in the exciting class made up of 38 world-class combinations with some of the biggest names in the sport being caught out by Uliano Vezzani’s tricky track. After his win, Abdel Said smiled: "Arpege jumped fantastic today and I am thrilled with the win. The footing here at Tops International Arena is brilliant and it was a great class of top sport for everyone to enjoy."12 combinations managed to go clear in the expansive ‘Wimbledon’ of show jumping arena’s grass ring. Denis Lynch set the pace early on with 16-year-old Rubens LS la Silla and lots of famous combinations kept being caught out by an unlucky one down including Lillie Keenan and Queensland E, Lorenzo de Luca and Don Vito, Marcus Ehning and Calanda and 2019 LGCT Super Grand Prix participants Shane Sweetnam and Alejandro. Continuing his fantastic form this weekend Jos Verlooy was aiming for the double of 5* wins today onboard FTS Killossery Konfusion and looked up on the pace until a miscommunication at the second to the last fence knocked their chances of a second win of the day.But it was Abdel Saïd who risked it all to pick up the lion's share of today’s prize pot on board his super consistent Arpege du Ru ahead of the closing day of thrilling action at Tops International Arena’s first CSI5* event of the Summer. The top three in the Young Horse class were virtually the same as yesterday with only second and third changing places. The competition was convincingly won by Irish rider Darragh Kenny and his talented Hanoverian mare Serendepety (Stolzenberg x Escudo I). The 34-year-old top rider, who runs his own stable, Oakland Stables, with branches in Wellington (USA) and Valkenswaard (NED), went clear and was the fastest in 57.94 seconds. Yesterday Dutch rider Niels Kersten came third, but today his clear round with King's Dream (KWPN, Carinjo x Indorado) in 60.88 seconds was good enough for a great second place. He exchanged places with German Tobias Meyer with Con Sugar-H OLD (Solitair x Check In) who now had to settle for third place.After winning the class for young horses Kenny also took the victory in the Big Tour (1.45m against the clock). Swiss and Olympic rider Beat Mändli quickly took the lead with Chartraine Pre Noir (SF, by Kannan), but the Irishman took over with a very nice round and never relinquished it. Kenny rode the KWPN mare Cicomein VDL (Chacco-Blue x Jus de Pomme) clear in 60.64 seconds. Uzbek Abdurakhmon Abdullaev made a good attempt to beat Kenny's time, but needed just over 1.5 seconds more. He thus relegated Mändli to third place with Go Four It B (KWPN, O'Brien x Celano).The young Belgian rider Alexander Housen prevented the podium of the 1.40m class (against the clock) from consisting of only American ladies. The 20-year-old talent managed to finish the course more than 2 seconds faster than the American Anna Dryden, who was in the lead for a long time. He rode the AES stallion Warriors Glory (Warrior x Caretino Glory) in this class. Housen already has a great list of victories at this young age including a gold team medal at the European Championships for Juniors (2018) and Young Riders (2021). The following places were all for American combinations: 2. Anna Dryden with Miss Milly Manou (OS, Mylord Carthago x Alexis Z), 3. Lillie Keenan with Cadeauminka (NRPS, Kannan x Jodokus), 4. Ailish Cunniffe with Olivia SCF (BWP, Cardento x Landino) and in fifth place Lillie Keenan with her other horse Opium JW an de Moerhoeve TN (BWP, Kannan x Nabab de Reve).Bas Moerings took care of the only Dutch victory. Moerings had saddled the KWPN mare Kivinia for this competition in which the clear combinations rode their jump-off immediately after their first round, and crossed the finish line in 32.06 seconds. Italy's Edoardo Alain Dubois came second again with Iberlina (KWPN, Vittorio x N-Aldato) while American rider Anna Dryden completed the top three in this class with Didi (Westf, Diarado x Ehrenwort 2). The CSI1* 1.25m competition was won by Polish rider Lukasz Brzóska and the Holsteiner stallion Dark'ann (Darcodello x Casall). In this section the combinations that stayed clear in their first round immediately rode their jump-off. The 47-year-old rider from Pniewy was the last but one to go and ruined the lead of Italian Edoardo Alain Dubois and his Kiara (KWPN, Kannan x Heartbreaker). Compared to many other riders, the Pole started riding late, but that does not seem to be holding him back. At 17, he got his first two horses. Third place went to German Rene Bauman and his Hanoverian gelding Gin Tonic (Graf Top x Satisfaction FRH).The American Alexis Sokolov made a successful debut at Tops International Arena. The 21-year-old won the 1.15m class with the mare Scarface (CZEWB, 2997 Aristo Z x 5055 Landos). For the rider, it is not only her debut at TIA but also the first time she is competing in Europe. Uzbek Miromon Tursunov and his Westphalian stallion Palladium KJV (Lancer III x Cornet Obolensky) had to take a step back after yesterday's victory and finished second. Swiss Nicole Kramer finished third with Condessa (Hann, Contendro I x Laptop).The last 1* class was an against the clock competition (1.35m). Cassidy Rein showed that yesterday's victory was no fluke. Today she was also the best with her beautiful mare Escorial K (Oldenb, Chacco's Son x Epsom Gesmeray). She rode again a fast and neat clear round in 59.79 seconds. The Belgian Lio Lamers came second with Charming Edition (KWPN, Namelus R x All Wins) and third place was for the Dutch Siebe Leemans with Plopsa Blue Z (Plot Blue x Calvados Z).